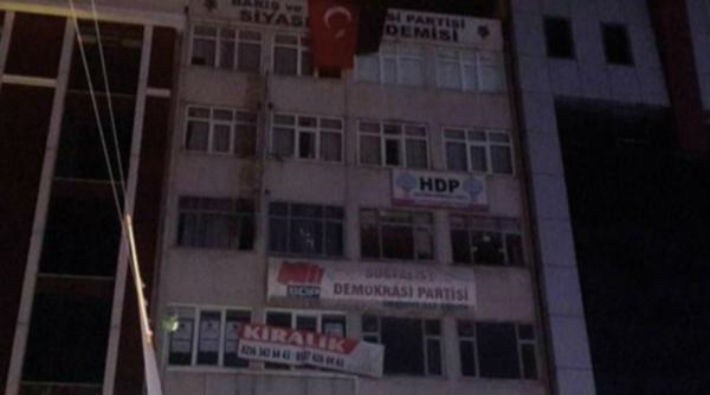 Police officer Numan Şerif Tatlı, who was trying stop an attack by ultranationalist groups on the pro-Kurdish Peoples’ Democratic Party (HDP) Ümraniye office on Sunday, died after falling from the roof of a building.

Hundreds of HDP offices across Turkey were attacked by angry mobs following a car bomb attack killed 13 soldiers and injured 56 others including civilians in Kayseri on Saturday.

According to a statement by the İstanbul Police Department, Tatlı was trying to stop protestors who went to the roof of a building where the HDP office located. Tatlı fell into the air well from the top of the building after the roof gave way.

Numerous attacks on HDP offices by ultranationalist groups in several Turkish cities have recently been reported.

Early on Saturday, a group of unidentified assailants attacked the HDP provincial branch building in the central province of Kayseri several hours after a car bomb attack.

Tens of people gathered in front of the buildings, shouting “Martyrs won’t die, the motherland won’t be divided” slogans. Media outlets reported that two explosions were heard from the building in Beylikdüzü.

In the meantime, some unidentified armed assailants attacked the party’s building in the Darıca district of Kocaeli and in Erzurum.