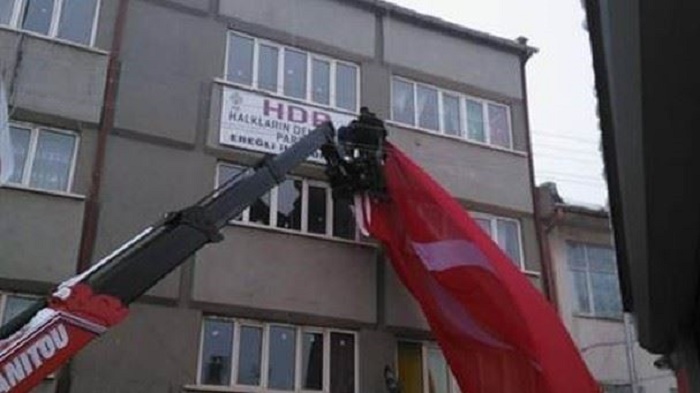 A group of protesters in Konya’s Ereğli district on Sunday hung a huge Turkish flag on the walls of the local pro-Kurdish Peoples’ Democratic Party’s (HDP) office, chanting religious slogans.

Protesters used a cherry-picker to reach the HDP’s Ereğli office on the third floor of a building and hung a giant Turkish flag that covered the party sign as well as some windows.

Angry mobs were reported to have attacked several HDP offices across Turkey after a car bomb attack that killed 13 soldiers and injured 56 others including civilians on Saturday.

The government said the outlawed Kurdistan Workers’ Party (PKK) could be behind the attack.

An angry group of people vandalized an HDP office in the western province of Çanakkale late on Saturday. According to local media, police briefly detained HDP members instead of the assailants.

Tens of people gathered in front of buildings, shouting “Martyrs won’t die, the motherland won’t be divided” slogans. Media outlets reported that two explosions were heard from the building in Beylikdüzü.

In the meantime, unidentified armed assailants attacked the party’s building in the Darıca district of Kocaeli and in Erzurum. (Turkey Purge)