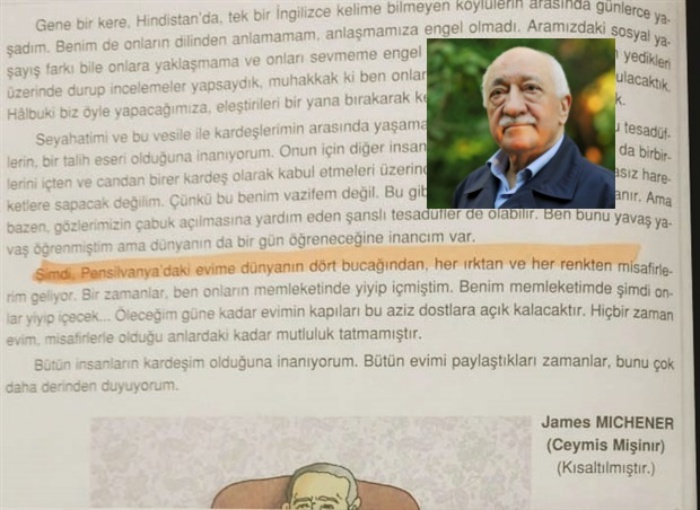 As part of an ongoing purge of anything that could remotely be associated with Turkish Muslim scholar Fethullah Gülen, who has been in self-imposed exile in Pennsylvania since 1999, Turkey’s Education Ministry has destroyed 892,000 textbooks that include the word “Pennsylvania” on the basis of it promoting “terrorist propaganda.”

The Birgün daily reported on Friday that the ministry destroyed the books at the beginning of the school year and introduced revised editions without the unwanted word “Pennsylvania” in the text, wasting an enormous amount of taxpayers’ money.

The objectionable textbook for sixth graders reportedly refers to American author James Michener, who mentioned Pennsylvania as his place of birth. Michener’s text was censored only because Gülen lives in that same US state. According to the Turkish government, Gülen was the mastermind of a coup attempt on July 15 despite the lack of any credible evidence.

In addition to anything that could remind people of Gülen, critical journalist Can Dündar’s name has also been removed from textbooks in Turkey. Officials from the Education Ministry reportedly said they simply did not want any text by Dündar, who has been directly targeted by President Recep Tayyip Erdoğan and labeled a “terrorist,” to appear in textbooks.

Ali Çolak, a former Zaman columnist and the editor of the now-shut-down paper’s culture section, was also deemed unwanted in Turkey’s textbooks. A text by Çolak in eighth grade textbooks was removed.

The censorship efforts have resulted in a great cost to taxpayers, although publication houses reportedly made significant revenue from the operation.