Search and rescue teams on Tuesday retrieved the body of a seventh miner from a copper mine that collapsed in the province of Siirt in southeastern Turkey while nine others remain trapped underground.

At least 12 miners were trapped in the copper mine late on Thursday after it was reportedly hit by a landslide, triggering a collapse that initially killed four people whose bodies were recovered by rescuers.

The bodies of two more miners were retrieved on Saturday and Sunday.

The Siirt Governor’s Office said an investigation has been launched, but authorities believe a landslide triggered by heavy rains caused the mine collapse.

Six people including the mine’s manager and two work safety experts have been detained by the police so far in relation to the mine tragedy in Şirvan. 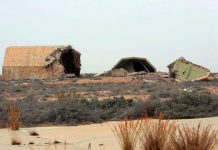