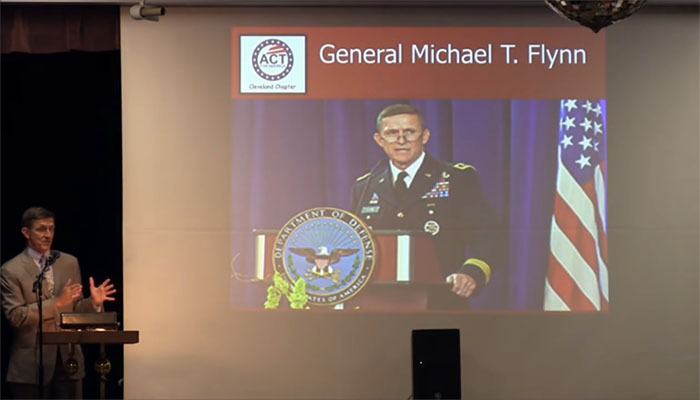 US President-elect Donald Trump’s top security adviser, retired Gen, Michael Flynn, said in a video recorded at a meeting on July 15 that he had information from Turkish military colleagues that there was a coup attempt going on in Turkey against the Islamist government and that it was worth applauding.

The video, which was uploaded on YouTube on July 18 and has attracted much interest after Turkish news portals and Twitter users recently shared it, shows that Flynn praises the military for its loyalty to Western values, democracy and secularism, whereas it criticizes President Recep Tayyip Erdoğan for turning Turkey towards Islamism.

“There is an ongoing coup in Turkey right now. I was just talking with a friend of mine [in the Turkish military about the coup attempt] who trained with us in the Turkish military. … The Turkish military has been excised for many years by what really became a secular country and then began to move towards Islamism. This is Turkey under Erdoğan, who is actually very close to [US] President [Barack] Obama. I’ll be fascinated to see what happens [after the coup]. Because If the military succeeds … they already announced that they are very much aware of their responsibilities in NATO and the UN and want the world to know Turkey is a secular nation.” he said.

While the crowd started applauding Flynn, he finished his talk by saying, “This is the military and worth applauding.”

In September, Flynn’s security consulting company Flynn Intel Group filed a lobbying disclosure which states that Flynn’s firm will advise Innova BV, a firm based in Holland and owned by Ekim Alptekin, an ally of Erdoğan and also chairman of the Turkish American Business Council, on US domestic and foreign policy and congressional appropriations bills for the State Department.

Most interestingly, Flynn wrote an op-ed for Washington-based The Hill on Nov. 8, just hours before Trump was declared president-elect, in which he repeatedly praised Erdoğan and called on the next president of the US to extradite US-based Turkish scholar Fethullah Gülen to Turkey since Erdoğan accuses him of masterminding a failed coup in Turkey on July 15.

The Turkish government and President Erdoğan have designated the faith-based Gülen movement, inspired by Gülen and operating charities, schools and businesses around the world, as a terrorist organization and have launched a widespread crackdown on suspected members since the failed coup. More than 110,000 have been dismissed from state jobs, close to 73,000 detained and over 32,000 arrested by Turkey over links to Gülen.

The position of Flynn in national security briefings that began in summer has been questioned by the US media due to his ’s ties with the Dutch firm linked to Turkey’s President Erdoğan, for providing all-source intelligence support.

According to a copy of a Memorandum of Understanding signed on election day and released by House Democrats on Thursday, the Trump transition team, as a condition of receiving government briefing materials, was required to provide a statement to White House Chief of Staff Denis McDonough that all designated members of the transition team had disclosed their financial interests and did not have any conflicts of interest.