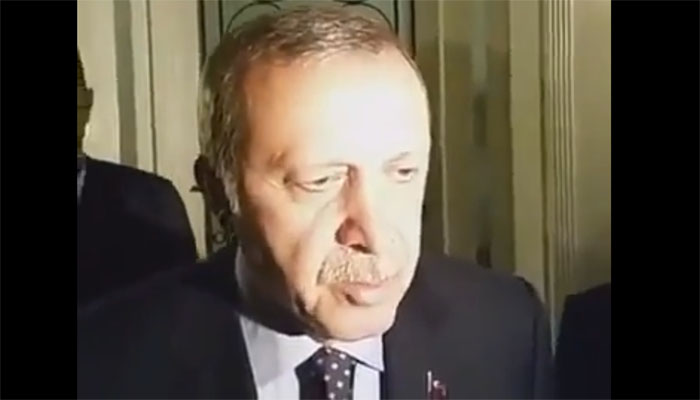 In a newly released video that was recorded by a local media representative of a coup attempt on the night of July 15, Turkish President Recep Tayyip Erdoğan was seen coming out of his hotel room in Marmaris at 12 a.m. local time and speaking to the media, saying that the coup attempt was carried out by followers of the faith-based Gülen movement and that Turkish prosecutors had already issued orders to arrest people linked to US-based Turkish scholar Fethullah Gülen.

The video was recorded and released by Temel Irmak, owner of the local Marmaris Yerel Gündem newspaper.

Despite the fact that Erdoğan later stated that he had learned from his brother-in-law about the coup attempt that evening, he said in the video, which was recorded only three hours after the beginning of the putsch, that the attempt was carried out by military officers linked to the Gülen movement.

He further said the Turkish judiciary had already taken action against the perpetrators of the coup attempt and had started detaining them.

Speaking with journalist Ruşen Çakır during an interview for medyascope.tv on Oct. 27, Turkish journalist Levent Gültekin said that President Erdoğan had information about a planned coup attempt prior to the evening of July 15 and had prepared an address to the nation video to be released at the time of the attempt, but his plan failed since the aides who were supposed to deliver the video to TV stations deserted him that night.

“That is why he hastily went live on CNN Türk via Periscope,” he said.

Gültekin also claimed that most of Erdoğan’s aides and the heads of state-run broadcaster TRT and the Anadolu news agency deserted him and were not reachable during a raid by rogue soldiers on the TRT building on the night of July 15.

“I was told by one of Erdoğan’s men who is very close him that the aide who was supposed to give the recorded video to TRT disappeared with the video until 12 that night,” he said.

While the events on the night of the coup attempt have yet to be fully uncovered, Erdoğan has repeatedly complained about an intelligence failure, saying he only learned about the putsch from his brother-in-law on the night of July 15.

Erdoğan’s contradictory statements concerning when exactly he first heard about coup attempt turned into a heated debate among opposition circles after the coup.

Although the government based its accusations of US-based Turkish scholar Fethullah Gülen, who inspired the Gülen movement, as the alleged mastermind of the coup attempt on the initial testimony of Akar, the opposition’s offer to hear to him as well as Fidan as witnesses was rejected by the ruling Justice and Development Party (AKP) deputies on the parliamentary commission that was established to investigate the foiled coup attempt.