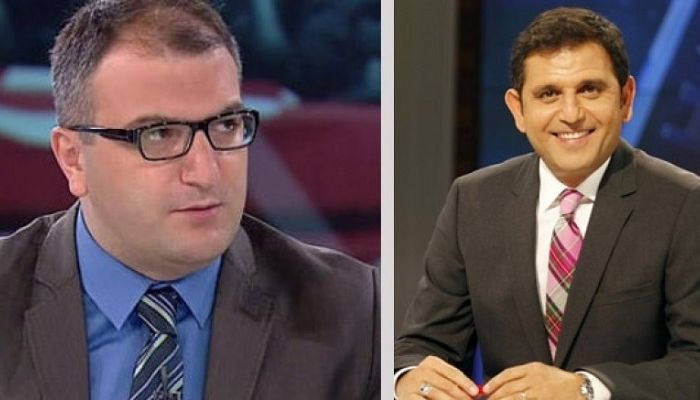 Cem Küçük, a columnist for the pro-government Star daily and a staunch supporter of President Recep Tayyip Erdoğan, said Fox TV news anchor Fatih Portakal must be fired by the administration as he showed solidarity with jailed journalists, including Fox TV news director Ercan Gün, in a speech during an awards ceremony on Sunday.

In series of Tweets from his personal Twitter account on Sunday, Küçük called on the administration of Fox TV, owned by the US-based Fox Networks Group, to dismiss Portakal over remarks made during an awards ceremony where he was selected best news anchor by one of the “Turkish Oscars,” the Golden Butterfly Award.

“The Fox administration must fire Portakal. Or else, sanctions will be imposed [on the group’s activities]. No one can praise FETÖ in this country. Get this into your heads,” Küçük tweeted.

FETÖ is a derogatory term and acronym for the Fethullahist Terrorist Organization, coined by President Erdoğan and the Justice and Development Party (AKP) government to refer to the Gülen movement, which Erdoğan and the AKP accuse of masterminding a failed coup attempt on July 15.

During his speech at the awards ceremony on Sunday, Portakal said the entire Fox family and administration are trying to do something every day for their jailed friend Ercan Gün.

Portakal also said he was accepting the award on behalf of the journalists who are doing their jobs properly. Portakal is known for his critical stance against the government.

Gün was arrested on July 25 after spending five days in detention as part of an investigation by then-İstanbul Public Prosecutor’s Office’s Terrorism and Organized Crime Bureau Deputy Chief Prosecutor İrfan Fidan along with other 42 journalists on suspicion of membership in the so-called FETO. Gün was sent to Silivri Prison.

Gün‘s lawyers submitted a complaint to the prison administration claiming he has been subjected to physical violence and sexual harassment in prison.

“Our client is being kept in the Silivri Closed Penitentiary’s C bloc. On Nov. 11, while he was being taken to the hospital for a health check at 11 a.m., Gün went through a security check. Even though he came up clean, one of the guards insisted on checking him by hand one more time. The check turned into sexual harassment, and when our client reacted to him by asking ‘What are you doing?’ the guard told him: ‘You are a convict, and I am doing my job, you traitor!’ the lawyers said in the complaint.