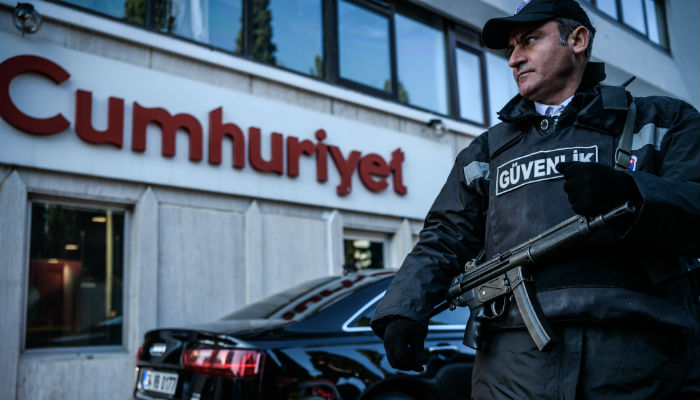 Amid widespread concerns over deteriorating freedom of the press in Turkey, Turkey on Monday detained 12 journalists from the secularist and critical Cumhuriyet daily including the paper’s Editor-in-Chief Murat Sabuncu following police raids on the journalists’ residences.

The İstanbul Chief Public Prosecutor’s Office on Monday issued detention warrants for 18 journalists from the daily over charges of aiding the terrorist Kurdistan Workers’ Party (PKK) and FETÖ.

The prosecutor’s office said the detentions followed an investigation into allegations that the newspaper had published material justifying the events of July 15.

Cumhuriyet said on its website that 12 of its staff members had been detained and some had their laptops seized from their homes. Footage showed one writer, Aydın Engin, 75, being ushered by plainclothes police into a hospital for a medical check.

Asked by reporters to comment on his detention, Engin said: “I work for Cumhuriyet. Isn’t that enough?”

Cumhuriyet’s former Editor-in-Chief Can Dündar is among the journalists for whom warrants were issued on Monday. Dündar is currently out of the country. His İstanbul house was being searched by police.

Police operations targeting Cumhuriyet editors, columnists and executives come after Turkey on Saturday dismissed a further 10,000 civil servants and closed 15 more media outlets over suspected links with militant groups and Fethullah Gülen, who inspired the Gülen movement. More than 100,000 people had already been sacked or suspended and nearly 75,000 detained and 37,000 arrested since the failed coup attempt in an unprecedented crackdown that Erdoğan says is crucial for wiping out Gülen’s network from the state apparatus.

Opposition groups say the purges are being used to silence all dissent against Erdoğan and the governing AKP party in Turkey, a NATO member that aspires to membership in the European Union.

The abortive coup on July 15 claimed the lives of more than 240 people and injured a thousand others. Dozens of media outlets in the country have been closed down and scores of journalists have been jailed by the government since the putsch.