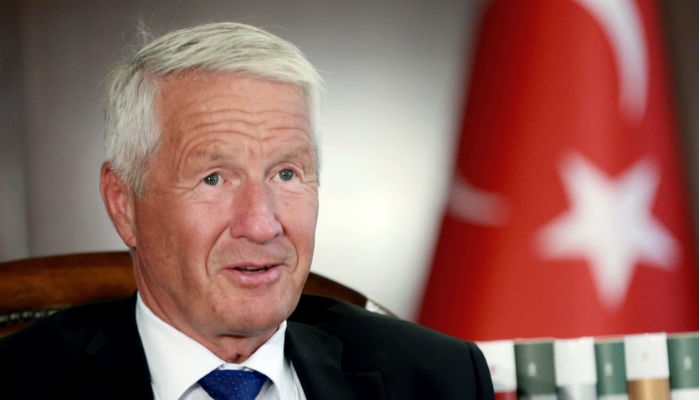 Council of Europe (CoE) Secretary-General Thorbjørn Jagland has released a statement expressing his concerns about the state of emergency and freedom of expression in Turkey in the wake of the detention of more than a dozen journalists from the critical Cumhuriyet daily on Monday.

A state of emergency was declared in Turkey on July 20 in the aftermath of a failed coup attempt on July 15.

“It is highly questionable if the raid against Cumhuriyet can be justified as a proportionate measure, even under the state of emergency,” said Jagland in a written statement released by his spokesperson Daniel Holtgen on Monday.

Amid widespread concerns over deteriorating freedom of the press in Turkey, Turkey on Monday detained 12 journalists from the secularist and critical Cumhuriyet daily including the paper’s Editor-in-Chief Murat Sabuncu following police raids on the journalists’ residences. Six other journalists from the daily were also facing detention.

Jagland also expressed his concern about the closure of 15 Kurdish media outlets through a government decree on Saturday.

“I should like to recall that the European Convention on Human Rights continues to apply in Turkey even during the state of emergency. Careful distinction must be made between violent or terrorist acts and expressions of opposition or strong criticism to the Government. Freedom of expression constitutes one of the essential foundations of a democratic society.If the state of emergency is used too excessively, Turkey risks a flood of cases at the European Court of Human Rights,” he warned.

The abortive coup on July 15 claimed the lives of more than 240 people and injured a thousand others. Dozens of media outlets in the country have been closed down and scores of journalists have been jailed by the government since the putsch.