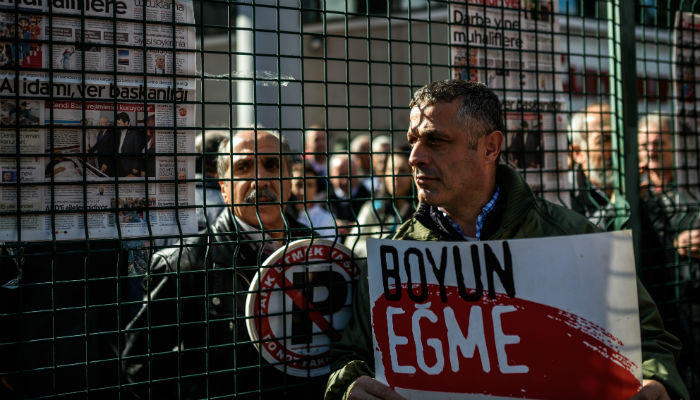 Thousands of readers of the Cumhuriyet daily gathered in front of the paper’s headquarters in İstanbul’s Şişli district on Monday to stand behind their newspaper in the wake of a police operation against the daily.

Detention warrants were issued for 18 journalists from the daily, and police began to take them into custody one by one on Monday morning. Twelve journalists including the daily’s editor-in-chief Murat Sabuncu have been detained so far.

The protestors chanted “Shoulder-to-shoulder against fascism,” “Free press cannot be silenced,” “We will not be intimidated by pressure” and “Thief, fascist AKP” slogans as they held copies of Cumhuriyet in their hands.

Some readers said they would begin a vigil in front of the Cumhuriyet building as an act of solidarity with the newspaper. Nongovernmental organizations have called on all citizens to gather in front of Cumhuriyet to lend their support to the daily.

Cumhuriyet is facing an investigation over charges of helping the terrorist Kurdistan Workers’ Party (PKK) and “FETÖ.”