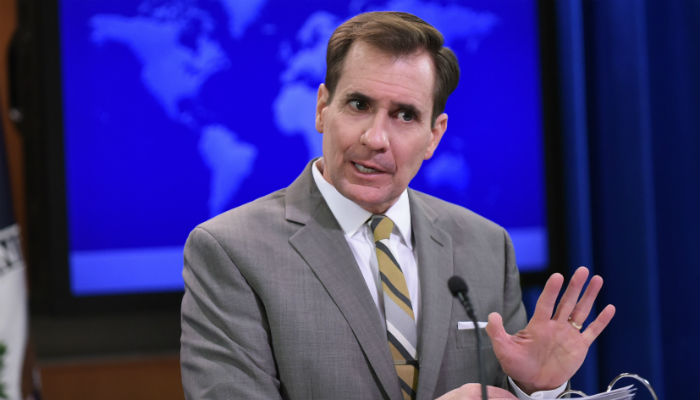 US State Department Spokesperson John Kirby has called on Turkish authorities to respect due process in the detention on Tuesday of two co-mayors of Turkey’s largest Kurdish province of Diyarbakır.

“As Turkish authorities investigate allegations that some local officials have participated in or have provided material support to terrorist groups, we note the importance of respect for due process. This, again, is nothing new; we’ve said this time and time again. Respect for due process is enshrined in the Turkish – is as enshrined in the Turkish constitution and will ensure that the results of these investigations will reinforce confidence in the judicial system among Turkish citizens,” Kirby told reporters at a daily press briefing in Washington DC on Wednesday.

Diyarbakır Co-mayors Gülten Kışanak and Fırat Anlı were detained on terrorism charges on Tuesday evening in a development that caused outrage and sparked protests in the region.

Kışanak and Anlı are accused of giving speeches in support of the outlawed Kurdistan Workers’ Party (PKK) and of promoting more autonomy for Turkey’s Kurds, according to a statement from the Diyarbakir Prosecutor’s Office. They are also accused of transporting the bodies of dead militants in official cars and of sparking violent protests.

“We urge that any expressions of concern over the co-mayors’ detention be peaceful and in compliance with the law. We also urge Turkish law enforcement and other authorities to act with due restraint and respect for the freedom of expression,” Kirby said in further remarks.

On Wednesday the Council of Europe also made a statement regarding the detention of the Diyarbakır co-mayors, expressing its concerns  and asking Turkey to provide it with the requisite explanation for the detentions.