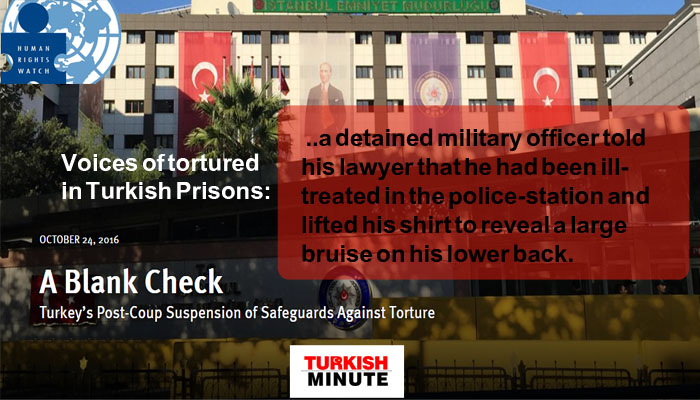 An officer detained on accusations of involvement in an attempted coup in Turkey was ill-treated during interrogation, but police officers denied allegations of torture, claiming that the detainee had been injured during the night of the coup.

What follows is the full text of the fifth abusive incident in the series published by HRW on Tuesday.

“A legal aid lawyer told Human Rights Watch that when she met her client, an officer suspected of involvement in the attempted coup, in the Ankara Security Directorate, he told her that he had been ill-treated in the police-station and lifted his shirt to reveal a large bruise on his lower back.

“The officer repeated the complaint about ill-treatment to a police officer during the interrogation in the presence of the lawyer. The police officer dismissed the allegation, however, saying that he had probably sustained the injury in fighting during the night of the coup. The lawyer said that the interrogation report did not mention her client’s complaint about ill-treatment, and she was too scared to make a note about it on the report.

“The officer did not complain about ill-treatment during the court-hearing to sanction his arrest and the judge sent him to pre-trial detention, the lawyer said.” (Turkey Purge)