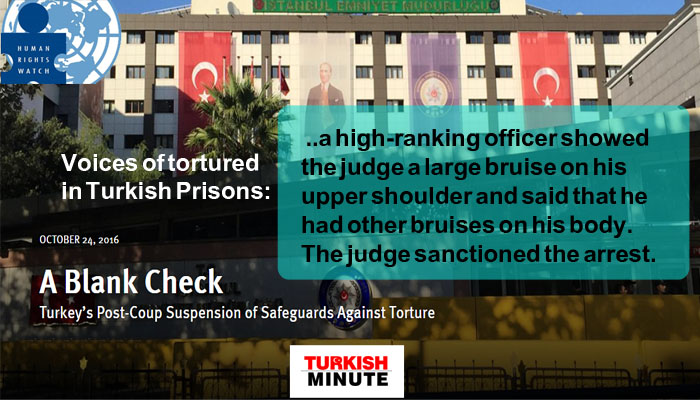 A high-ranking officer suspected of involvement in a failed coup in Turkey told a judge that he was severely beaten while in custody at Ankara police headquarters and showed him a large bruise on his body; yet, the court transcript of his testimony omitted the details of the ill-treatment, a lawyer told Human Rights Watch (HRW).

What follows is the full text of the fourth abusive incident in the series published by HRW on Tuesday.

“A high-ranking officer suspected of involvement in the failed coup told a judge during a court-hearing that resulted in him being placed in pretrial detention that police had beaten him during his detention at the Ankara Security Directorate, according to a legal aid lawyer who attended the hearing. The lawyer said that her client showed the judge a large bruise on his upper shoulder and said that he had other bruises on his body.

“The lawyer said that she had seen her client in the Ankara Security Directorate a few days earlier during his interrogation. She was only allowed to speak with him for three minutes behind a curtain in a corridor full of police and other detainees, she said, so she had only been able to explain his rights to him. She doesn’t know whether he had the bruises at the time of their meeting.

“The judge sanctioned the arrest. The lawyer said that the court transcript of her client’s testimony says that he complained about ill-treatment, but leaves out details of the ill- treatment, including him showing the bruises to the judge.” (Turkey Purge)