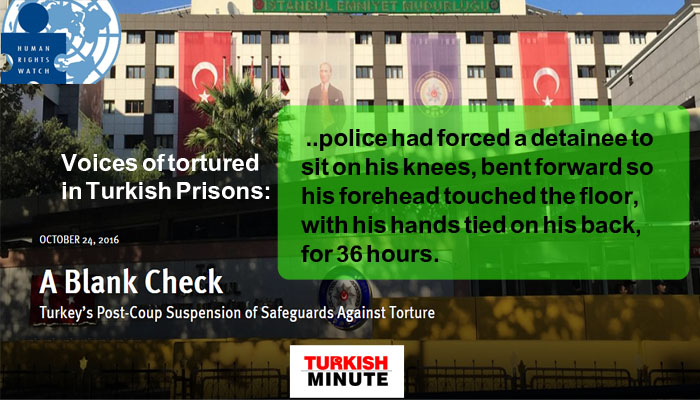 A forensic specialist told Human Rights Watch that Turkey’s post-coup detainees prefer not to talk about bruises on their bodies resulting from torture as they fear further persecution in prison.

What follows is the full text of the eighth abusive incident in the series published by HRW on Tuesday.

“A forensic specialist described to Human Rights Watch his examinations of two detainees who bore signs of having been beaten.

“The forensic specialist said that one detainee, an officer suspected of involvement in the failed coup, told him that the police had forced him to sit on his knees, bent forward so his forehead touched the floor, with his hands tied on his back, for 36 hours. Whenever he tried to move, the police hit him on the head and the back with a belt. Afterwards, the detainee told the specialist, the police placed him in a cell with several enlisted soldiers who severely beat him.

‘There was not a part of his body that was not covered in bruises and he suffered from a frozen shoulder from the stress-position,’ the forensic specialist said.

“In the second case, the forensic specialist examined a businessman suspected of having links to the Gülen movement each day for four days. During the first two examinations he saw no signs of injuries. During the third examination, however, he saw bruises on his back. ‘He said that the bruises stemmed from sleeping on a hard surface, but there is no way that this was the cause of the bruises,’ the forensic specialist said. ‘Somebody had hit his back with something blunt.’

“Neither of the detainees wanted the specialist to record the injuries, but he did it anyway, the forensic specialist said.” (Turkey Purge)