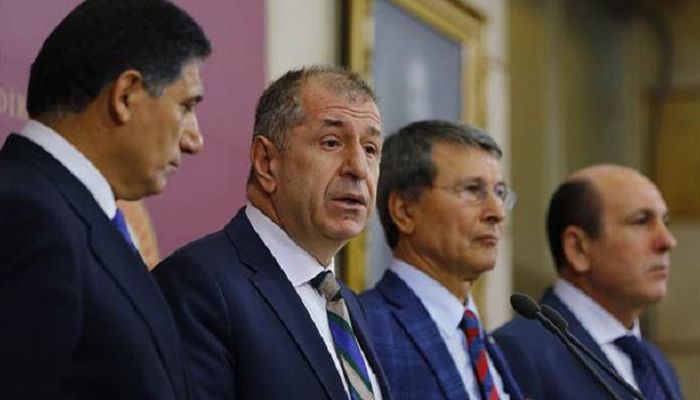 Five members of Parliament from the Nationalist Movement Party (MHP) announced on Monday that they will cast a nay vote in a possible upcoming referendum for a switch to an executive presidency in Turkey.

At a press conference in Parliament in Ankara on Monday, MHP deputies Ümit Özdağ, Nuri Okutan, Yusuf Halaçoğlu, Seyfettin Yılmaz and İsmail Ok told reporters that they are in favor of a parliamentary system of governance in Turkey. They also called on party members, saying that supporting the idea of a referendum during meetings in Parliament and then casting a nay vote in a possible referendum is not correct.

MHP leader Devlet Bahçeli sparked a fresh debate over the introduction of an executive presidency in Turkey when he recently said there was a de facto situation in Turkey concerning its style of governance and that President Recep Tayyip Erdoğan was already acting like an executive president although his post is largely ceremonial. Bahçeli said the situation needs to be resolved.

Speaking at a party meeting in Afyonkarahisar on Sunday, Prime Minister Binali Yıldırım said his government has completed work on a change in the system of governance in Turkey and will take it to Parliament as soon as possible.

“We have conducted the necessary debates and consultations [about a switch to an executive presidency]. We will take it to Parliament as soon as possible. Our Parliament will discuss our proposal, and then it will be presented to the public,” he said.

The ruling Justice and Development Party (AKP), which has 317 deputies in Parliament, needs the support of at least 13 more deputies from opposition parties to take a constitutional amendment on a switch to an executive presidency to referendum. Currently, there are 133 deputies from the Republican People’s Party (CHP), 59 from the pro-Kurdish Peoples’ Democratic Party (HDP), 40 deputies from the MHP and one independent in the Turkish Parliament.