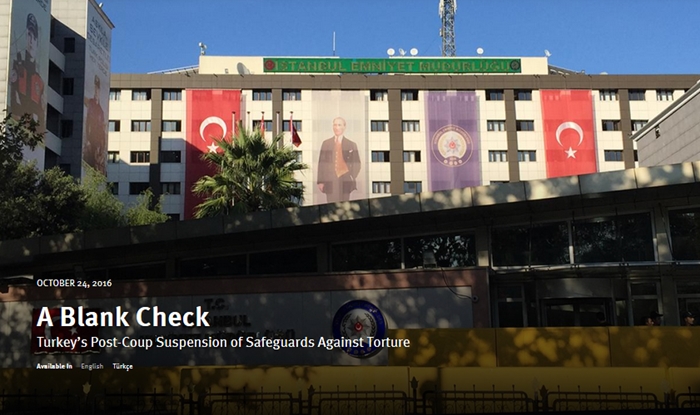 US-based rights group Human Rights Watch (HRW) said in a report on Tuesday that Turkish police have tortured and otherwise ill-treated individuals in custody after emergency decrees removed crucial safeguards in the wake of a failed coup attempt on July 15.

In a written statement on the HRW website on Tuesday, Hugh Williamson, Europe and Central Asia director at Human Rights Watch, said the Turkish government effectively wrote a blank check to law enforcement agencies to torture and mistreat detainees at will by removing safeguards against torture.

“The cases we have documented seem to indicate that some have done just that. Turkey’s government should reinstate these crucial safeguards now,” he said.

In the 43-page report titled “A Blank Check: Turkey’s Post-Coup Suspension of Safeguards Against Torture” HRW said that the government decrees adopted under the state of emergency have negatively affected police detention conditions and the rights of detainees. The report details 13 cases of alleged abuse, including stress positions, sleep deprivation, severe beatings, sexual abuse and rape threats since the coup attempt.

It said that all of this has taken place in a pervasive climate of fear in which lawyers, detainees, human rights activists, medical personnel and forensic specialists told Human Rights Watch they worried that they would be next in the government’s extensive purge of alleged coup supporters.

According to HRW, Turkish authorities’ recent decision to postpone a visit to Turkey by the United Nations special rapporteur on torture casts serious doubt on the authorities’ commitment to prevent torture and ill-treatment. It also added that a provision in the emergency decrees absolves officials of any responsibility for actions taken in the context of the decrees.

HRW quoted a person who was detained after the failed coup as saying in a statement to a prosecutor: “The police chief who detained me … began to slap me in the face and eyes. They beat me on the soles of my feet, on my stomach, then squeezed my testicles, saying things like they’d castrate me.”

Underlining that the prohibition of torture in international law is absolute and cannot be suspended even in times of war or national emergency, HRW noted that a state of emergency does not give the government carte blanche to suspend rights.

Human rights violations detected by HRW in the report note that Turkish government authorities have repeatedly denied detainees and their lawyers access to medical reports for those in police custody and detention that could substantiate allegations of ill-treatment during arrest or detention, citing the secrecy of the investigation.

The cases include allegations of methods ranging from stress positions and sleep deprivation to severe beating, sexual abuse and threats of rape.

Turkish government officials, including President Recep Tayyip Erdoğan, declared after the coup attempt that they had zero tolerance for torture. However, the authorities have failed to respond appropriately to recent torture allegations, instead often calling those making the allegations biased and accusing them of being coup supporters or of making propaganda for the Gülen movement, inspired by US-based Turkish scholar Fethullah Gülen, who the government accuses of masterminding the failed coup.

Mehmet Metiner, the ruling Justice and Development Party (AKP) deputy who is head of the parliamentary sub-committee on prisons, recently stated that the commission would not investigate allegations of torture of alleged Gülen supporters in prisons.

Calling on Turkish authorities to immediately rescind decrees and investigate compelling allegations of torture and ill-treatment, Williamson said, “It would be tragic if two hastily passed emergency decrees end up undermining the progress Turkey made to combat torture.”