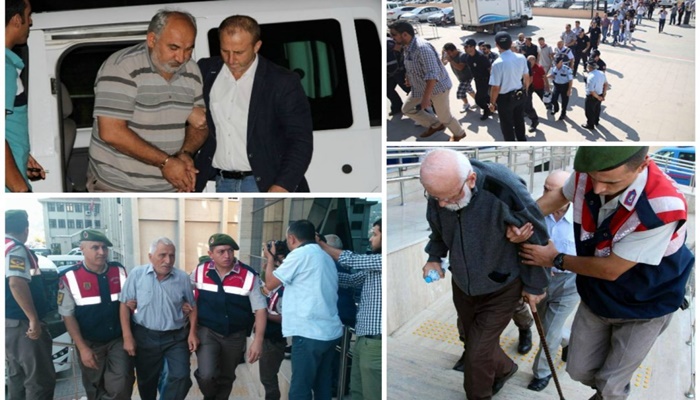 Along the same lines as rhetoric from the Justice and Development Party (AKP) government, President Recep Tayyip Erdoğan argued on Saturday that reports of victims of a massive post-coup purge in Turkey are part of Gülen movement propaganda.

Speaking at a rally in Bursa, Erdoğan said petitions filed by dismissed state officials all have the same wording and alleged that it is part of a centralized campaign by the Gülen movement.

Erdoğan also threatened the followers of Gülen, saying: “Despite July 15, those who have not expressed sincere remorse and tell us what they know are never innocent. O! Members of FETÖ [a derogatory term coined by the AKP government to refer to members of the Gülen movement] and people who are connected to them, if you do not come forward and tell us what you know, I’m sorry to have to say it, but wherever we find you, we will get you and put you in prison like the rest of them.”

Expanding on his threats, he added: “The price they pay for justice will not be sufficient. Their lives will be consumed with making amends to the nation.”

Erdoğan holds the Gülen movement responsible for a coup attempt in Turkey on July 15 and has been using his unsubstantiated accusations as a justification for a massive purge that started immediately after the putsch.

“If you show mercy, you get into a position of needing mercy,” Erdoğan told the crowd, vowing to continue the witch-hunt against perceived and real sympathizers of the Gülen movement.

Despite Erdoğan’s denial of the existence of victims and violation of human rights, he himself made a contradictory statement in early September acknowledging mistakes in the purge.

Erdoğan had confessed that a witch-hunt he launched against the faith-based Gülen movement had gotten out of control and that people who have nothing to do with the movement were being labeled as Gülenists.

Speaking to reporters while returning from China where he attended the G20 summit in September, Erdoğan said: ”There is a situation of oranges being mixed with apples. Some people are saying things randomly with the hope that they may turn out to be true. Some people are doing this, particularly in the press and on TV. I watch TV when I have the opportunity and have heard some of the comments. These people [accused by the commentators] actually have nothing to do with this [the Gülen movement] — they just put a label on those people. These things are not right. We should avoid such mistakes.”

Turkey has dismissed more than 100,000 people from government positions and arrested in excess of 32,000 over links to the Gülen movement. According to a statement by the main opposition, the number of people who are affected by the witch-hunt has exceeded 1 million.