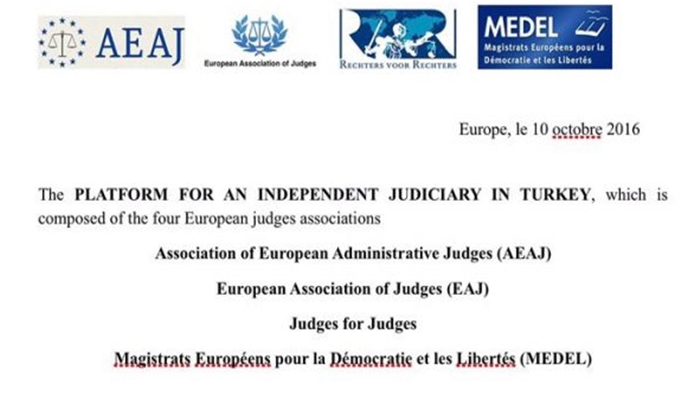 In a joint statement released on Monday four European judges associations urged Turkey to abide by the fundamental principles of the rule of law while directing attention to judges and prosecutors in Turkey who have been arrested without due process.

The Association of European Administrative Judges (AEAJ), European Association of Judges (EAJ), Judges for Judges and MEDEL issued a joint statement saying that the charges of terrorism leveled against arrested judges and prosecutors in Turkey are very weak, also calling on Turkey to observe the right to a fair trial.

The statement said that emergency rule has limitations regarding the extent of measures taken and that restrictions should be kept narrow. The judges in addition raised the issue of the unlawful seizure of the private property of persecuted people working in the legal profession in Turkey.

The European judges urged the Council of Europe to request that Turkey meet its obligations under Article 15 of the European Convention on Human Rights (ECHR).

The statement asked for the examination of every individual assertion of torture, especially the reported death of Seyfettin Yiğit, who was found hanged on Sept. 16.