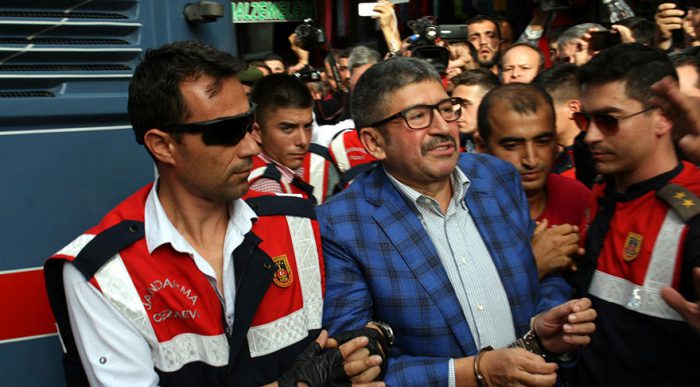 Hacı, Memduh and Bekir Boydak brothers, who are three prominent businessmen from Kayseri-based Boydak Holding, were let out of prison on Saturday to attend their mother’s funeral but they were brought to the funeral area in handcuffs, attracting widespread criticism.

The Boydak brothers were arrested over the past months  due to their alleged links with the faith-based Gülen movement. They are facing terror and coup charges as part of an investigation against the Gülen movement against which the Turkish government has been waging an all-out war, claiming that it has masterminded a failed coup attempt in July.

Boydak brothers’ mother Huriye passed away on Friday. The woman fell ill after her three sons were arrested and she was being treated at a Kayseri hospital.

Funeral prayers for Huriye Boydak was held at the Camiikebir Mosque in Kayseri on Saturday. Hacı, Memduh and Bekir Boydak brothers were brought to the funeral area in a gendarmerie vehicle in handcuffs. They were accompanied by gendarmerie officers during the funeral ceremony and were not allowed to carry their mother’s coffin.

The funeral ceremony was attended by around 5,000 people. Gendarmerie officers did not allow Boydaks to see and talk to anybody other than members of their immediate family.

Some people in the crowd reacted and called on the gendamerie officers to unlock the brothers’ handcuffs.

Boydak brothers’ nephews, İlyas and Murat Boydak, who are also jailed as part of the same investigation, were also let out of prison to attend their grandmother’s funeral.

In the meantime, Turkish Islamic scholar Fethullah Gülen on Sunday released a condolence message over the death of Huriye Boydak, wishing all members of the Boydak family strength and peace.