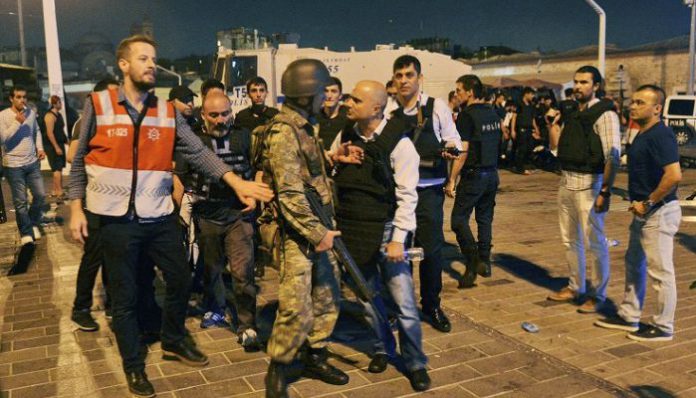 A number of police officers who confronted putschist soldiers on July 15, when a group of rogue soldiers attempted to topple the government by means of a coup d’état, have been suspended on coup charges, part of the latest purge in the National Police Department.

Turkey’s National Police Department announced late on Monday that it had suspended 12,801 police officers, including many police chiefs, across 81 provinces over alleged ties to the Gülen movement, a civil society movement inspired by the views of US-based Turkish Islamic scholar Fethullah Gülen, who the Turkish government and President Recep Tayyip Erdoğan accuse of masterminding the failed coup.

According to media reports, there are a number of police officers among 12,801 who resisted the soldiers during the coup attempt on the night of July 15.

İstanbul’s Bosphorus Bridge was one of the most important locations during the failed coup, where much of the blood was shed. Police officer F.Z. and his colleagues surrounded the military unit that blocked the bridge and tried to convince the army officers to surrender since a large number of civilians had also gathered there. When soldiers fired live bullets towards the crowd, one of the bullets hit F.Z.’s police cruiser. F.Z. was sacked on Oct. 3 on coup charges.

While the carnage started on the Bosporus Bridge, a tank approached İstanbul police headquarters on Vatan Street. Police officer M.S. was the one who asked civilians to build a barricade in front of the tank, and he handed out small Turkish flags to the protestors, some of whom climbed onto the tank. M.S. even detained a former police chief who was found in the tank and handcuffed him. M.S. was also suspended from duty as part of the massive purge on Oct. 3.

Another police officer, H.S., whose normal beat is the Batıkent neighborhood in Ankara, was dispatched to observe the military activity at the Army Aviation School on the night of the attempted coup. Tens of police officers were killed after low-flying F-16s bombed the Ankara police headquarters as well as the Gölbaşı Special Forces Headquarters. H.S. was suspended on Oct. 4 over links to the failed coup.