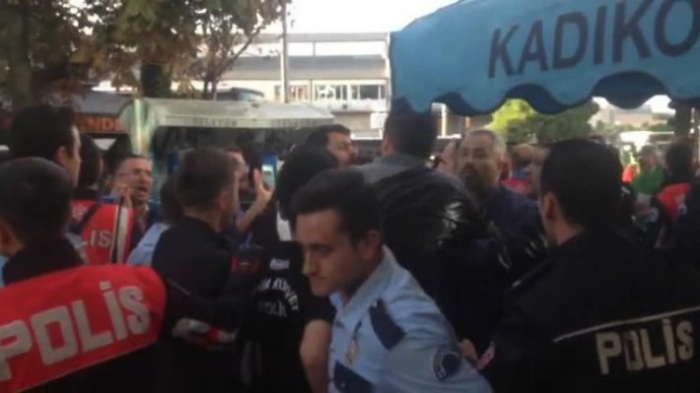 Turkish police detained 25 protesters in the central province of Eskişehir when members of Birleşik Haziran Hareketi (BHH, United June Movement) distributed pamphlets defending secularism in the face of the growing role of religion in politics.

On Sunday thousands of people in Ankara, İstanbul and Eskişehir took to the streets to protest the detentions of the previous day.

Riot police intervened, stating that all groups need to obtain permission from authorities for any sort of gathering during the current state of emergency. Turkey is now being governed by emergency rule, which gives the government broad powers to run the country through decrees and allows authorities to ban any public gathering or protest.

The group distributed a pamphlet titled #LaikliğiKazanacağız as they say the secular nature of the Turkish political system is being eroded through the government’s increasingly anti-secular policies.

The BHH came into existence after the Gezi protests during the summer of 2013, comprising mainly left-leaning, secular and Kemalist elements. The primary aim of the group is to provide a united front between the youth branches of the main opposition Republican People’s Party (CHP) and the pro-Kurdish Peoples’ Democratic Party (HDP). The June movements of various groups gathered under the umbrella of the BHH to launch a more effective campaign to defend secularism, human rights and democracy.