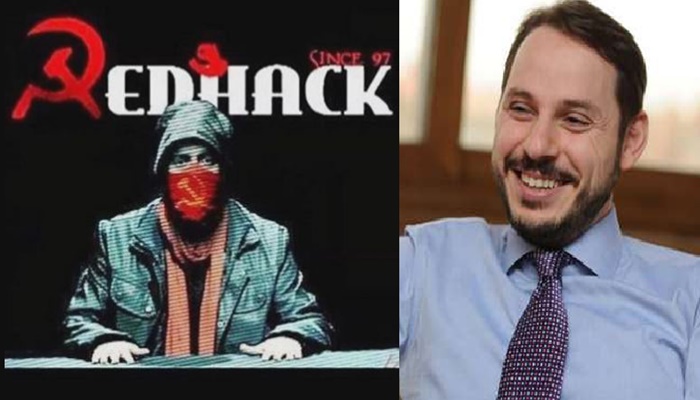 In the meantime the T24 news website reported that news reports on the RedHack statement about Albayrak’s email account have been blocked in Turkey. Only VPN users can access the news stories, T24 reported.

RedHack claimed they found out from the emails that pro-government Sabah daily columnist Hilal Kaplan wrote the speeches of President Erdoğan.

After becoming a trending topic on Twitter, Redhack also hacked the Sözcü daily website for not carrying their story of hacking Albayrak’s accounts. RedHack released their story on Sözcü’s website.

The hackers also said the Hürriyet daily didn’t release a story about the incident, claiming Albayrak has a secret audio recording of Aydın Doğan in one of his email accounts which was recorded in the Hürriyet building. Turkish media tycoon and businessman Aydın Doğan is the founder of Doğan Holding, which also owns Hürriyet.

RedHack announced from their Twitter account that they will release all the data in Albayrak’s accounts to local and international media if the government fails to release Altınörs and Aslı Erdoğan.

While prize-winning novelist and journalist Aslı Erdoğan was arrested for alleged links to the terrorist Kurdistan Workers’ Party (PKK) in August, the HDP’s Altınörs was arrested along with five others in the central province of Tokat on Sept. 16 for membership in the terrorist PKK.