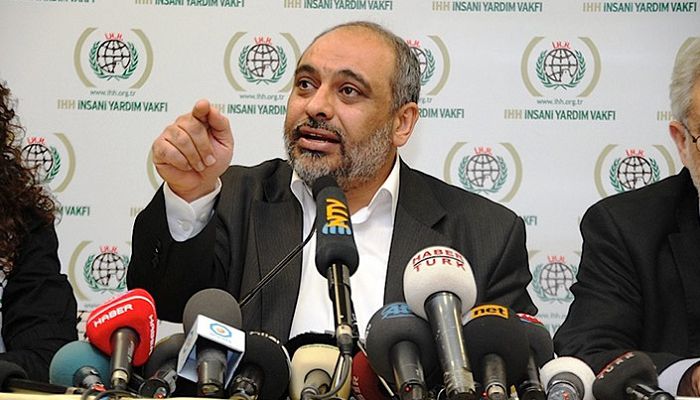 Bülent Yıldırım, president of the Foundation for Human Rights and Freedoms and Humanitarian Relief (İHH), which organized the Mavi Marmara flotilla to Gaza in 2010, told reporters in İstanbul on Tuesday that Turkey is in its weakest position ever vis-à-vis Israel after a reconciliation agreement came into effect in September.

Speaking in front of the İstanbul Courthouse after a hearing in a case involving the heads of Israel’s security forces, Yıldırım said Turkey is in the weakest position it has ever been in with regard to Israel after the finalization of an agreement of normalization.

Ratified by Parliament on Aug. 20, signed by President Tayyip Erdoğan on Aug. 31 and published in the Official Gazette on Sept. 9, the normalization deal with Israel is expected to restore diplomatic relations between the two countries,

The ties between Turkey and Israel had been tense since 2010, when the Israeli navy killed one Turkish-American and nine Turkish pro-Palestinian activists who were on board the Mavi Marmara, part of the Gaza Freedom Flotilla heading to Gaza to deliver aid.

The Israeli raid took place in international waters of the Mediterranean Sea. The ships of the Free Gaza Movement and the İHH were carrying humanitarian aid and construction materials to the blockaded Gaza Strip.

According to the agreement, only one of Turkey’s three conditions to fix relations with Israel is to be fulfilled. Although Israeli Prime Minister Benjamin Netanyahu apologized for the Gaza flotilla raid, meeting one of the conditions, the two remaining stipulations — lifting the Gaza blockade and paying compensation for the incident in 2010 — reportedly will not be fulfilled in the way that Turkey demands.

Speaking after an iftar dinner at the presidential palace in Ankara in July of this year, Erdoğan, referring to the IHH members behind the 2010 Gaza flotilla, said, “Did you even ask the prime minister of the time before setting sail to bring humanitarian aid from Turkey [to Gaza]?”

“We asked them to pay compensation. $20 million was decided for the families of the [2010 Gaza flotilla raid] victims. They say we deserve more; is it reasonable to set a price for the blood that was shed? We decided on this amount as compensation; they either take it or leave it. We are taking a step on an international scale here. We have been helping them, and we still are.”

Erdoğan implied that the IHH was putting on a show when they continued towards Gaza to bring humanitarian aid despite the fact that Israel had warned them not to proceed without first securing its permission.

“Do we do this [send help to the needy] for appearance’s sake? [No,] we do it in a decent manner.”