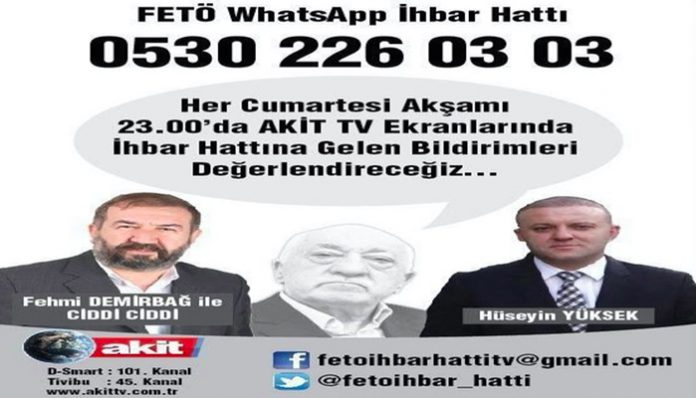 The pro-government Akit TV has established a hotline to receive tips about the members of the Gulen Movement, which the President along with top state officials pinned the blame on for the July 15 coup attempt.

A weekly, prime-time news program named Ciddi Ciddi [Seriously] called on viewers to snitch on Gulenists through its newly-established hotline reachable on WhatsApp, Facebook and Twitter.

“We will talk over the received tips on AKİT TV at 23:00 every Saturday night…” read an announcement released by the program’s social media accounts on early Saturday.

The very first tip came from Hüseyin Yüksek, one of the guest speakers in the program who called on authorities to arrest Erol Kahraman, the former mayor of Adana’s Sarımazı district over alleged involvement into the movement.

Recently-created Twitter account of the program is registered with the username @fetoihbar_hatti, which translates into FETOhotline. FETO is an abbreviation coined by the government circles to descrive the alleged terrorist network of Gulen Movement within state institutions.

Earlier in August, another online portal, —fetoihbar.net–which was set up at the initiative of the Turkish government called on people to lodge complaints about the people affiliated with the movement

Last weekend, Erdoğan reiterated an earlier call he made to Turkish people, calling on them to report followers of movement in their surroundings to the police and prosecutors’ offices so that they can be prosecuted for their links to the movement. (Turkey Purge)