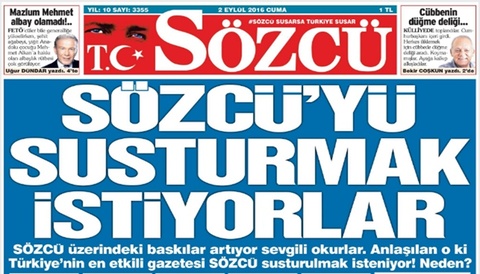 Kemalist-nationalist daily Sözcü claimed on Friday that an investigation is under way for the closure of the paper over allegations that it has links to the Gülen movement.

On a special front page it published, Sözcü said: “They want to silence Sözcü.” Calling on its readers to lend support to the daily, it noted: “The reason is simple: We write the facts, and it scares some circles [in government].”

Denying any link to the Gülen movement, the daily underlined that “Sözcü is a hardcore Atatürkçü [follower of Atatürk] and republican. Being Atatürkçü and getting support from the people has been annoying some people. Let it continue. We will not deviate from the right path.”

Turkey survived a military coup attempt that killed over 240 people and wounded more than a thousand others, on July 15. Immediately after the putsch, the government along with President Recep Tayyip Erdoğan pinned the blame on the Gülen movement and launched a widespread purge aimed at cleansing sympathizers of the movement from within state institutions, dehumanizing its popular figures and putting them in custody. Thousands of people have been purged from state bodies, over 41,000 detained and more than 22,000 arrested since the coup attempt. Arrestees included journalists, judges, prosecutors, police and military officers, academics, governors and even a comedian.