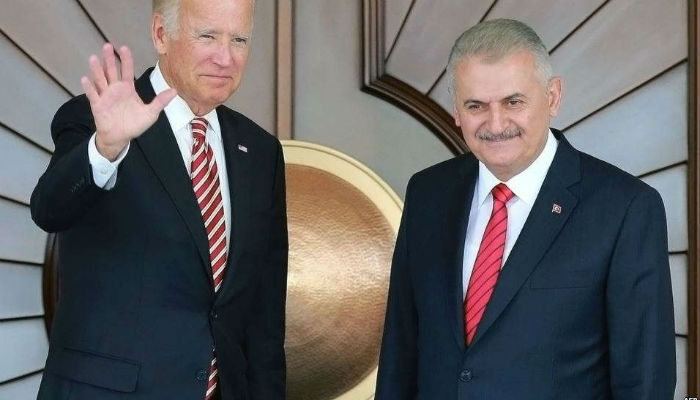 US Vice President Joe Biden, who arrived in Ankara on Wednesday, said the US administration wants to cooperate with Turkey over the Turkish government’s request for the extradition of Turkish Islamic scholar Fethullah Gülen but that it is a US court that will make the decision.

Speaking at a joint news conference with Turkish Prime Minister Binali Yıldırım, Biden said US officials and judicial experts are cooperating with their Turkish counterparts and examining evidence submitted to the US by Turkey about Gülen.

He said the documents provided by Turkey need to be submitted to a US court and that the documents should be prepared in accordance with US law concerning the extradition of criminals.

Biden said the US can extradite Gülen only after an American court makes such a decision.

The US vice president noted that his country has no intention of protecting someone who inflicts damage on an ally but that they have an obligation to abide by the law.

President Recep Tayyip Erdoğan reiterated frequent, earlier demands for the extradition of Gülen during a speech in Ankara on Wednesday.

Turkish authorities claim Gülen, who lives in Pennsylvania, was the mastermind behind the violent coup attempt that killed over 240 people on July 15, while Gülen denies any involvement.

However, in a development that surprised many, the US State Department said on Tuesday that Turkey has formally requested the extradition of Gülen but not on issues related to the recent coup attempt, which Turkish leaders have accused him of inspiring.

“So we can confirm now that Turkey has requested the extradition of Gülen,” State Department deputy spokesman Mark Toner told a press briefing on Tuesday. US officials earlier said they were reviewing documents submitted by Turkey but were not able to say if they constituted an extradition request.

Toner told reporters the formal extradition request from Turkey was not related to the attempted coup last month but was for other issues for which Gülen was being sought by authorities in Ankara.

The Turkish government and President Erdoğan have designated the faith-based Gülen movement, inspired by Gülen and operating charities, schools and businesses around the world, as a terrorist organization and have launched a widespread crackdown on suspected members since the failed coup.