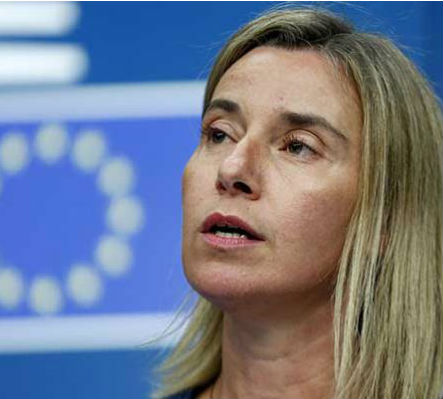 According to a statement issued on the website of the EU External Action, the pair came together to “to discuss a broad number of issues related to the relationship between Turkey and the European Union.”

The statement elaborated on the discussed issues, saying “These included the recent decision of the Turkish Parliament to permit the lifting of parliamentary immunity from prosecution for a large number of Members of Parliament, the situation in the southeast of Turkey and the implementation of EU-Turkey Statement of 18 March, including accession negotiations and visa liberalisation process.”

A highly controversial bill was proposed by the ruling Justice and Development Party (AK Party) on April 12, and passed in Turkish Parliament’s General Assembly with 376 votes on May 20.

The constitutional amendment suggests lifting deputies’ immunity from prosecution, who currently face investigations and mainly targets politicians from the pro-Kurdish HDP. The bill is to affect a total of 138 lawmakers, 50 of them from HDP.

Last week, United States (US) Deputy Spokesperson Mark Toner said that they are concerned that lifting lawmakers’ immunities will have a chilling effect on freedom of speech across Turkey.