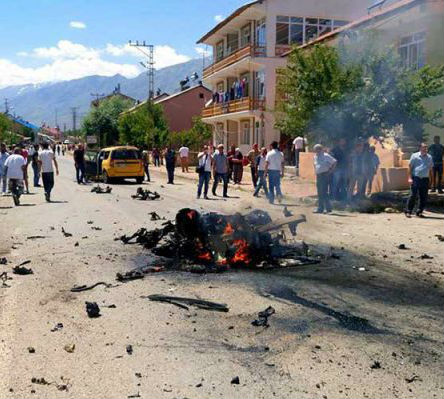 A house complex for courthouse employees in the predominantly Kurdish southeastern Tunceli province was attacked by the terrorist Kurdistan Workers’ Party (PKK) with a bomb-laden car on Monday, with nine people being injured, including policemen and the wife of a prosecutor.

The incident took place in the Ovacık district at the site of a court’s house complex, destroying a large part of the buildings and causing a fire. Two police officers and seven civilians were taken to the Ovacık state hospital by ambulances. Three of them are reportedly in critical condition.

A footage capturing the explosion indicated that a supposed PKK member parked a car in front of the house complex on the Cumhuriyet street at around noon, opened the car door and fled the scene shortly before the blast, which also destroyed the car. The street was closed off by security forces.