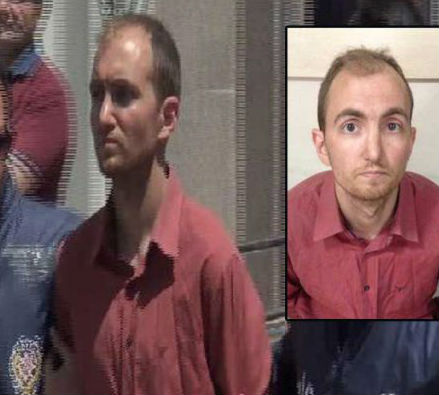 Atalay Filiz, an alleged serial killer who has been in Turkey’s top agenda in the recent weeks after emerging as the prime suspect of three unsolved murders, was captured in the western city of İzmir on Sunday morning, following three years on the run.

Filiz was reportedly spotted by a 16-year-old driver assistant on a bus, which he was riding on at around 7:30 a.m. Police took action upon receiving the report. However, Filiz realized the situation, exited the bus and got on another one. The driver assistant then called the police again and gave the license plate information of the second bus Filiz took. Police set up check points on the highway between the districts of Menderes and Gümüldür. Filiz’s bus was stopped by the police in downtown Gümüldür, where the suspected killer was detained with no resistance.

Upon his capture, Filiz, who was carrying a backpack, reportedly showed the police a fake ID to evade detention. He was subsequently taken to the Menderes Police Station. He was identified as Atalay Filiz after the police searched his backpack and found his real ID. Filiz was then turned over to İstanbul Homicide Bureau by the İzmir police.

Filiz’s backpack reportedly contained a large amount of cash, a number of fake IDs, 14 credit cards under his name and other names, convenience goods, two hunting knives, tear gas, name lists, as well as many movie and music CDs. Filiz’s passport indicated that his latest trip abroad was to Indonesia in 2012. In addition, a document bearing identity information of a French citizen, who looked like Filiz, was discovered in the backpack.

Filiz is accused of the May 27 murder of history teacher Fatma Kayıkçı in İstanbul, 2013 killing of Göktuğ Demirarslan, the son of an army general, and his Russian girlfriend Elena Radchikova in Ankara. He had been in hiding since the death of Kayıkçı, which later revealed his connections to the 2013’s killing of Demirarsland and Radchikova. Filiz’s former girlfriend Olga Seregina, a Russian national, has gone missing several years ago. During his interrogation, the suspect denied any connection with the loss of Seregina. Filiz did not comment on the other murders.

Since May 27, Filiz spent nights in hotels, as well as in fields, parks and beaches. He reportedly survived eating frogs and various herbs, which he knew were not poisonous, based on his biology knowledge and military camps he had attended.