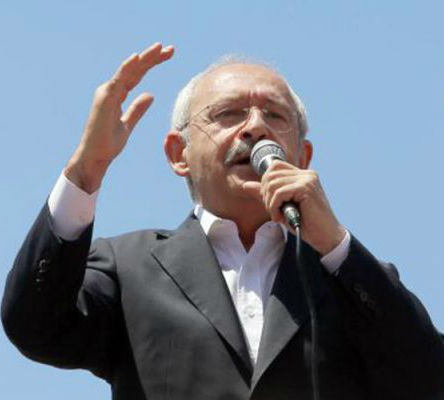 Large crowds from 81 provinces gathered on Saturday outside the headquarters of main opposition Republican People’s Party (CHP) in Ankara in support of CHP leader Kemal Kılıçdaroğlu, who was recently subjected to attacks and thrown a shell casing by ruling party supporters as an implication of death threat.

The CHP Women’s Branch organized a march towards the Justice and Development Party (AK Party) headquarters to leave a black wreath in front of the building as a show of protest. However, the group was blocked by the police, who set up a barricade. In addition, some of the roads leading up to the AK Party headquarters were sealed off by the police. A brawl erupted between the marchers and the police, which resulted in tear gas use.

Earlier this week, a group of protesters attacked Kılıçdaroğlu during a funeral ceremony for police officers who were killed in Tuesday’s bomb attack in İstanbul. Several participants tore down the wreath bearing the name of Kılıçdaroğlu. The wreath was thrown out of the mosque’s courtyard, where it was afterwards kicked by an individual. Ahead of the funeral prayer, a group of people, supposedly ruling AK Party supporters, attacked Kılıçdaroğlu.

Following the funeral, one of the assailants threw a shelling case in front of the CHP leader. The assailant was spotted talking with Prime Minister Binali Yıldırım earlier in the ceremony, the pictures that emerged in the aftermath of the incident indicated.

The man was then removed from the mosque and detained by the police. Later in the day, three more people were detained in connection with the incident. All the detainees were released after interrogation by the police.