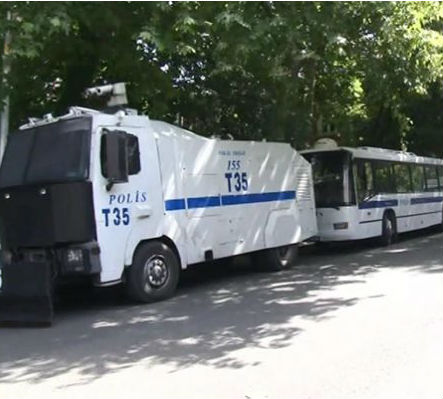 Istanbul police evicted on Tuesday a building of the Turkish Chamber of Architects on Beşiktaş District Governor’s order, detaining 15 architects who resisted, on the third anniversary of nationwide Gezi Park protests, in a move considered a possible retaliatory government act in response to the chamber’s major support for the Gezi movement.

The building, which used to be a police station, was assigned to the Chamber of Architects in 2002 for 49 years.

Muhcu, arriving at the building during the evacuation, told the media that the administrative court order was unlawful and issued under government pressure. According to Muhcu, the court order was only regarding the abolition of the protocol between the ministry and the chamber, however, it didn’t include an eviction order. Muhcu described the eviction of the building as “hijacking.”

In the meantime, on the occasion of the Gezi anniversary, Istanbul police took security measures around the Taksim Square neighborhood and blocked access to the Gezi Park, which was the center of 2013’s street demonstrations that swept the country. Scores of riot police officers and water cannon vehicles were dispatched to Taksim. The Cumhuriyet monument in the Taksim Square was surrounded by police barricades.