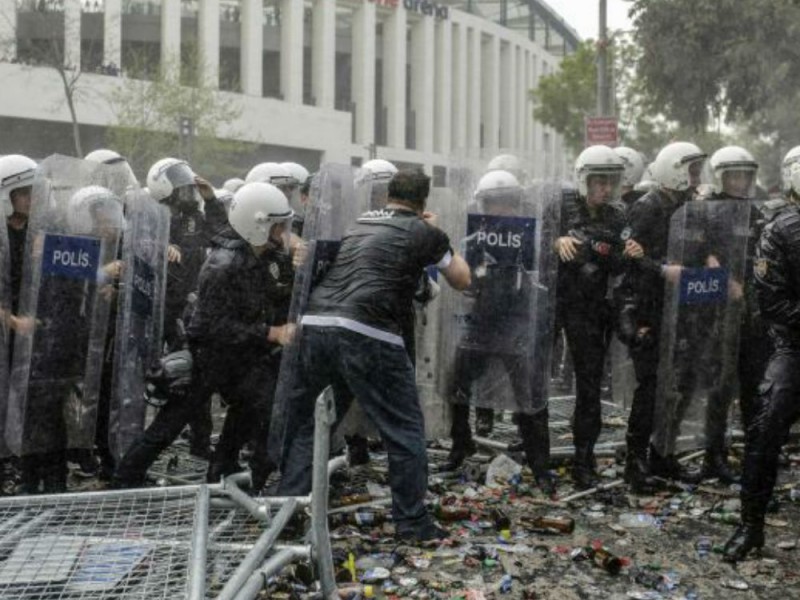 Turkish riot police used tear gas and water cannons to disperse thousands of supporters of Beşiktaş who had gathered outside their new stadium, Vodafone Arena, in İstanbul to celebrate the first match at the venue.

Beşiktaş were to play Super Lig rival Bursaspor in the first match at the over 40,000 capacity Vodafone Arena on the shores of the Bosphorus, which was opened by President Recep Tayyip Erdoğan and top government officials on Sunday.

The teams’ fans were not allowed to attend the stadium’s opening ceremony on Sunday, a situation which caused great resentment and disappointment among the team’s supporters.

Thousands of Beşiktaş fans clogged roads outside the venue in order to be present in the vicinity when the match took place.

But police trucks then fired water cannon at the fans outside the stadium as armored anti-riot officers fired tear gas, sending fans running for cover, an AFP photographer said.

Others responded by throwing bottles in anger at the police.

It was not immediately clear why police dispersed the crowd, which included young children, local media said.

Authorities had reportedly formed a security line around the arena and blocked all car traffic, when police appeared to react when crowds pushed towards the turnstiles, other witnesses said.

Fans have taken to social media to accuse President Erdoğan of opting to open the stadium at a closed VIP event on Sunday rather than risking the wrath of thousands of fans at the Bursaspor clash.

Most Beşiktaş fans, particularly the club’s famous fan club Çarşı, were not pleased with the attendance of Erdoğan to the stadium’s opening.

Çarşı members played a key role in 2013 Gezi Park protests that sparked over the development of an İstanbul park that represented one of the biggest challenges to then-Prime Minister Erdoğan’s rule.

Thirty five members of the group were put on trial on widely-ridiculed charges of trying to stage a coup but all were acquitted in late December 2015.