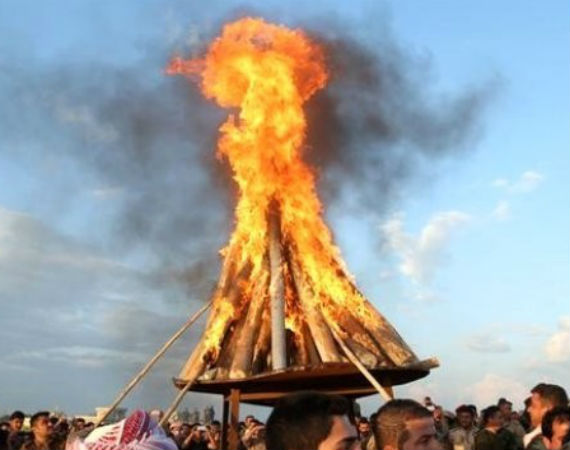 More than 100 people were detained in İstanbul on Sunday as they wanted to make their way to a celebration to mark the arrival of spring festival of  Nevruz organized by the pro-Kurdish Peoples’ Democratic Party (HDP) in Bakırköy district.

Last week, İstanbul Governor’s Office announced that Nevruz celebrations planned for the weekend would not be allowed due to recent increase in terrorist attacks.

Responding to an application filed by the HDP to organize Nevruz celebrations in Bakırköy on Sunday, the İstanbul Governor’s Office said the celebrations will not be allowed “due to possible provocative actions, considering recent terrorist attacks and sensitivities of the public.”

Despite the ban, the HDP still wanted to hold the celebration in Bakırköy on Sunday but police prevented hundreds of people from arriving at the square where the celebration would be held by blocking the roads leading to the area.

Lawyer Bülent Çoban said 75 people were detained across İstanbul for trying to attend the Nevruz celebration. HDP co-chairperson Figen Yüksekdağ said in a statement later that the number of detainees reached 120 in İstanbul.

Police took intense security measures across the city in the early hours of Sunday while Interior Minister Efkan Ala said in a statement on the same day that his ministry tasked 120,000 police officers and 80,000 gendarmerie across Turkey to maintain security during Nevruz celebrations. He said Nevruz celebrations have been allowed in 10 provinces and districts.

The Ankara Governor’s Office also announced last week that demonstrations and celebrations to be held on the occasion of Nevruz would not be allowed in the province on March 19, 20 and 21.

Nevruz is a spring festival traditionally marked in the second half of March and has a highly symbolic meaning for Kurds, with colorful celebrations across the predominantly Kurdish southeast of Turkey.

But the celebrations also frequently became the scene for clashes between police and demonstrators.

The ban on Nevruz celebrations come in the wake of a deadly terrorist attacks in Ankara and İstanbul.