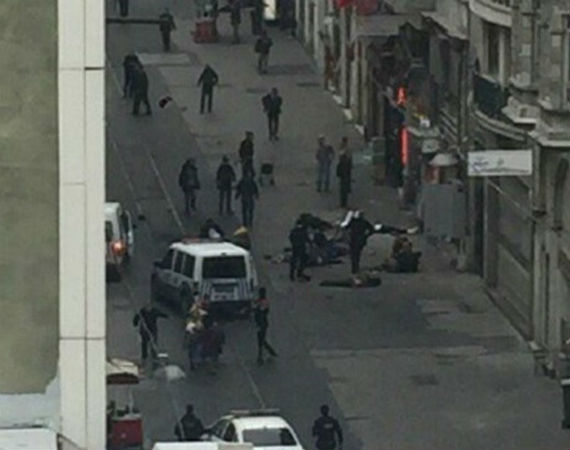 At least five people were killed and 36 people injured, of whom 12 are foreign nationals, in a bomb attack on İstanbul’s İstiklal Avenue, on Saturday morning.

In a statement on Saturday, after the attack Health Minister Mehmet Müezzinoğlu said that 12 of the injured are foreign nationals. “Of the 36 injured, seven are in serious condition. Four of those injured have been taken into surgery” he said speaking to reporters.

“I hope there are no new losses,” Müezzinoğlu said.

The victims were later identified by Turkish officials. Israeli nationals Simha Simon Demri, Yonathan Suher and Avraham Godman and Iranian national Ali Rıza Khalman died in the attack along with the attacker, according to Turkish media reports.

A media gag order has been issued by the Radio and Television Supreme Council (RTÜK) on the attack took place on Balo Street in front of the Beyoğlu District Governorship building, off İstiklal Avenue, one of İstanbul’s busiest streets. Turkish media have reported that the bomber sett of the explosives among a tourist group. Three of the injured are reported to be Israeli tourists.

According to preliminary inspections the explosion is reported to have been the result of a suicide bomber. Police have sealed the street from both sides. No vehicles apart from police vehicles or ambulances are being allowed near the scene of the bombing.

Doğan News Agency reported that 10 of the injured, two of whom are in critical condition, have been taken to Şişli Etfal Hospital.

Turkish Prime Minister Ahmet Davutoğlu denounced the suicide bombing as “inhumane” and said Turkey would continue its struggle against “centers of terrorism”.

“No center of terrorism will reach its aim with such monstrous attacks,” he said in a written statement. “Our struggle will continue with the same resolution and determination until terrorism ends completely,” Reuters quoted him as saying.

Steinmeier also said that he had ordered German institutions in Turkey to close their doors, “because protecting German citizens and the people working and learning in these establishments must now take precedence.”

The German embassy in Ankara, consulate in Istanbul, and two German schools – one in each city – were shut as a result, Steinmeier further said, adding that he had reached the decision overnight.

Steinmeier said that security precautions at the institutions were being bolstered, while the foreign ministry would convene on Thursday for a crisis meeting on the security situation in Turkey.

The German move came as the Kurdistan Freedom Hawks (TAK), a splinter group of the terrorist Kurdistan Workers’ Party (PKK), claimed responsibility for a bomb attack in Turkey’s capital province of Ankara on Sunday night which claimed the lives of at least 35 people.