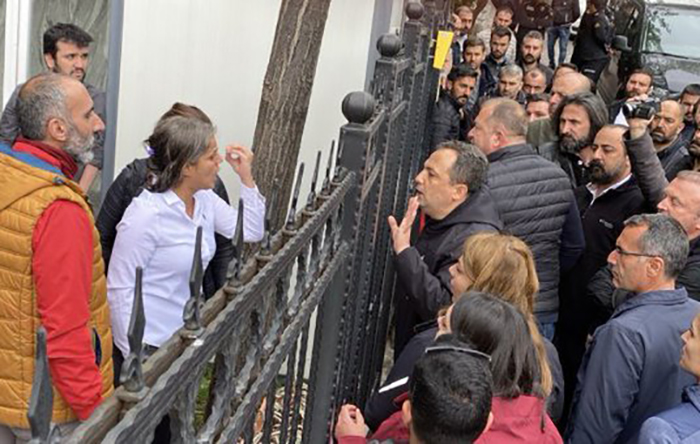 Lawmakers and executives from the pro-Kurdish Peoples’ Democratic Party (HDP) have been subjected to violence and threats by police officers in front of party headquarters in Ankara over a civilian protest, which is alleged by party members to have been provoked by the ruling Justice and Development Party (AKP), local media reported on Thursday.

Tensions rose in front of HDP headquarters on Thursday due to the heavy police presence that followed a demonstration by civilians claiming that their children had been abducted to join the Kurdistan Workers’ Party (PKK).

Designated as a terrorist organization by Turkey, the United States and the European Union, the PKK has waged a separatist insurgency against the Turkish state since 1984. More than 40,000 people have been killed in the conflict, centered in southeastern Turkey.

Although both President Recep Tayyip Erdoğan’s AKP and its ally, the far-right Nationalist Movement Party (MHP), frequently accuse HDP, the second-largest opposition group in parliament, of ties to the PKK, the party denies the government’s claim and says it is working to achieve a peaceful solution to Turkey’s so-called Kurdish issue.

According to Turkish media reports, police officers surrounded HDP headquarters and prevented party members from leaving the building by resorting to battery, pepper spray and threats and insults.

HDP lawmaker Ayşe Acar Başaran tweeted a video of the moment she was threatened by a police officer who told her to “Shut up, [or] I’ll get you,” saying that what happened in front of HDP headquarters wasn’t a democratic protest but a “provocation” that was an apparent example of the ruling party’s “mob-like ways.”

A while after the events, HDP spokesperson Ebru Günay made a press statement in front of the party building, accusing the AKP and the Interior Ministry – which she referred to as the “Ministry of Criminal Affairs” – of provoking the demonstration in order to prevent the HDP’s political activities.

Tensions rose again after the statement and police intervened against party members who were chanting, “The HDP is the people, the people are here,” briefly detaining eight of them, including Central Decision and Executive Board (MKYK) member Veli Saçılık.

“We were forcibly detained in front of HDP headquarters. We will defeat the AKP,” Saçılık said in a tweet.

Meral Danış Beştaş, parliamentary group deputy chair of the HDP, also made a statement to the press in Diyarbakır on Thursday, saying the demonstration in front of the HDP building in Ankara was jointly organized by the Interior Ministry, the governor’s office and the police department.

“When the HDP or … other segments of the political opposition want to hold a demonstration in Turkey, thousands of law enforcement officers come up against them [and] they are banned, beaten and tortured. But today, the police brought two families in front of our headquarters and they wanted them to stage a protest,” Beştaş said.

“Who held this demonstration … was not the families but the police. The police got the order from the Interior Ministry. It was given by the interior minister to the governor, who then gave it to the chief of police, who instructed selected law enforcement officers to be there,” she said.

The political and legal assault on the HDP, which intensified after the truce between Kurdish militants and the AKP government broke down in 2015, grew even stronger after Erdoğan survived a coup attempt in July 2016 that was followed by a sweeping political crackdown.

The party currently faces a closure case on charges of “attempting to destroy the indivisibility between the state and the people.”

Hundreds of HDP politicians, including the party’s former co-chairs, are behind bars on terrorism charges, while most of the 65 HDP mayors elected in the predominantly Kurdish Southeast in 2019 have been replaced by government-appointed trustees.