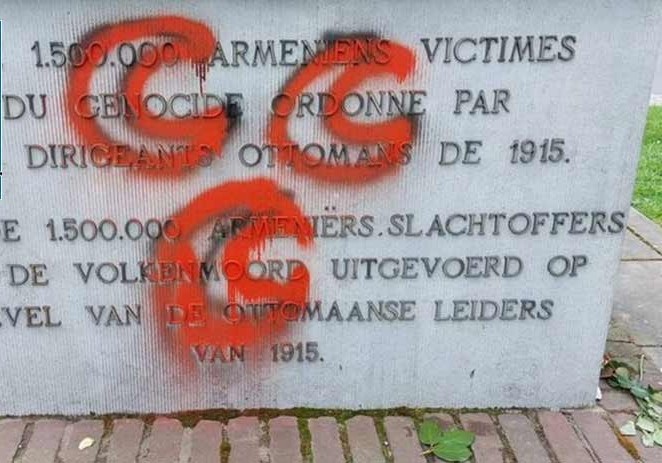 Members of the Grey Wolves, the far-right Ülkücü movement that enjoys a well-organized structure in Turkey and has thousands of followers in some European countries, have vandalized a memorial dedicated to the victims of the Armenian Genocide in Brussels’ Henri Michaux Square, the Artı Gerçek news website reported on Tuesday.

The Grey Wolves are seen as the paramilitary wing of the Nationalist Movement Party (MHP), an ally of President Recep Tayyip Erdoğan’s ruling Justice and Development Party (AKP), and their ideology is mainly based on Turkish nationalism. Therefore, Kurds, Armenians and other minorities in Turkey have occasionally been their targets.

According to Artı Gerçek, the Armenian Genocide Memorial Khachkar was spray-painted on Tuesday with crescent moons — the symbol of the MHP — and profanity targeting Garo Paylan, an Armenian lawmaker from the pro-Kurdish Peoples’ Democratic Party (HDP).

Paylan also faced an unprecedented level of backlash due to a motion he submitted last week asking the legislature to recognize the massacre of Armenians at the hands of the Ottoman Empire as genocide and the removal of the names of the perpetrators of the genocide from public venues.

The motion was rejected by Parliament Speaker Mustafa Şentop on the grounds that it contravened the parliamentary bylaws.

Most of the criticism Paylan received came from AKP politicians, with party spokesperson Ömer Çelik describing the motion as an “immoral proposal.”

The attack took place two days after local Armenians gathered near the monument in Henri Michaux Square on April 24 to commemorate the 107th anniversary of the 1915-16 killings of more than a million Armenians, which Turkey categorically denies as constituting a genocide.

The mayor of Brussels, Christos Doulkeridis, who dispatched a team to clean up the monument, said: “I will never be able to tolerate this kind of behavior. The police have launched a case, and repairs will be made immediately.”

Artı Gerçek also quoted Belgian parliamentarian Michel De Maegd as saying that the Grey Wolves’ “despicable act” was “neither less nor more than a call of hate” for him.

“Everything must be done to find and punish the culprits. I’m going to turn to the government for that. Intolerance and hatred have no place in our society,” he added.

In 2020 France officially banned the Grey Wolves after a center dedicated to the memory of those who died in the mass killings of Armenians during World War I was defaced with graffiti, including the name of the Grey Wolves.

Earlier last year, the European Parliament called on the European Union and its member states to examine the possibility of adding the Grey Wolves to the EU terrorist list.

In its 2019-2020 report prepared by Turkey rapporteur Nacho Sanchez Amor, the EP voiced concerns about the group, saying it was expanding to worrying levels not only in Turkey but also in EU countries.

As many as 1.5 million Armenians are estimated to have been killed from 1915 to 1917 during the waning days of the Ottoman Empire, which suspected the Christian minority of conspiring with adversary Russia in World War I.

Armenian populations were rounded up and deported into the desert of Syria on death marches in which many were shot, poisoned or fell victim to disease, according to accounts at the time by foreign diplomats.

Turkey, which emerged as a secular republic from the ashes of the Ottoman Empire, acknowledges that 300,000 Armenians may have died but strongly denies it was genocide.