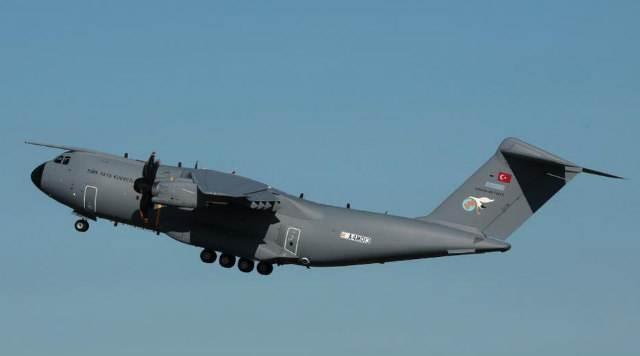 Turkey dispatched two A400M military transport aircraft to Ukraine on Feb. 24 to evacuate Turkish nationals. The two aircraft have remained at Boryspil Airport near Kyiv since that date due to the closure of Ukrainian airspace. “We are in contact with both Russia and Ukraine on this matter to ensure the safety of our aircraft,” Defense Minister Hulusi Akar told Habertürk TV.

From the Turkish Air Force (TAF) point of view, the deployment of the aircraft to Ukraine hours before Russia invaded Ukraine and their getting stranded there can only be explained by the strategic blindness of military intelligence. So how could the TAF not receive information about an operation that would begin hours later in Ukraine, and not make a correct prediction about the course of Russia’s action against Ukraine? Turkish Navy reconnaissance and surveillance could not detect Russian warships positioned in the Black Sea to launch Kalibr cruise missiles? While the Turkish public tries to keep track of information about the Russian army’s progress in Ukraine on social media and Telegram, how can the British Ministry of Defence provide regular details from the theatre of operations in Ukraine every day?

The main reason the TAF was unable to detect the start of the Russian invasion of Ukraine is that it lacks signals intelligence capabilities and technologies, which are critical components of modern military intelligence.

The General Staff established the GES Command in 1958 to provide signals intelligence from the Union of Soviet Socialist Republics (USSR) for NATO purposes during the Cold War with the help and technical support of the US Army. The GES command had the largest communications and electronic eavesdropping capacity in Turkey, with 13 stations spread throughout the country. The listening devices and antennas were used to collect signals from Balkan, Caucasian and Middle Eastern countries, track satellites, intercept communications and decode encrypted messages.

Turkish President Recep Tayyip Erdoğan intended to strengthen the National Intelligence Organization (MIT) and reduce TAF’s role in intelligence collection and management by transferring all the intelligence collection facilities and capabilities of the GES Command to MIT. The government was suspicious of the TAF because it believed the GES Command not only wiretapped Turkey’s enemies but also kept a close eye on government ministers.

On Jan. 1, 2012 the GES Command, which had the highest signal intelligence capabilities in Turkey, was transferred to MIT. The name was later changed to the Signals Intelligence Directorate (SIB) with the task of conducting signals intelligence by analyzing all types of communication and radar signals.

SIB and its enhanced capabilities

The configuration of AKINCI drones procured from MIT is not known. AKINCI drones with high payload capacity can be used for both strike missions, the primary purpose of their development, and SIGINT activities. Based on SIB’s requirements, the MULTI-INT Multi-Function Special Mission Aircraft project will include the delivery of two Bombardier Challenger 600s equipped with payloads for SIGINT and IMINT missions.

Lessons learned by the TAF from the Ukraine crisis

The TAF was deprived of its strategic foresight capability, which contributes to shaping military strategy and security policy, by the Erdoğan government stripping it of its signals intelligence tools in favor of political ambitions. The TAF’s inability to determine when Russia would begin its invasion of Ukraine and its failure to track the operation’s progress shows that the TAF is strategically blind. The way to cure the TAF of this blindness is to establish a Joint Intelligence, Surveillance, and Reconnaissance (JISR) center within the TAF. To this end, all listening stations and equipment belonging to the GES Command and transferred to MIT’s SIB should be returned to the TAF. The TCG Ufuk should be placed under the operational control of the Naval Forces Command and conduct SIGINT operations in accordance with TAF JISR priorities. JISR will be the center of data derived from SIGINT, IMINT (from the Göktürk-1 and Imece intelligence satellites) and Open Source Intelligence (OSİNT). Big Data applications and deep-learning algorithms will be used to transform the data collected from the various sources into information that will enable the TAF to forecast. In this way, the TAF will overcome its strategic blindness, and Turkey will once again be able to maintain adequate military intelligence, which is a critical component of regional power status.