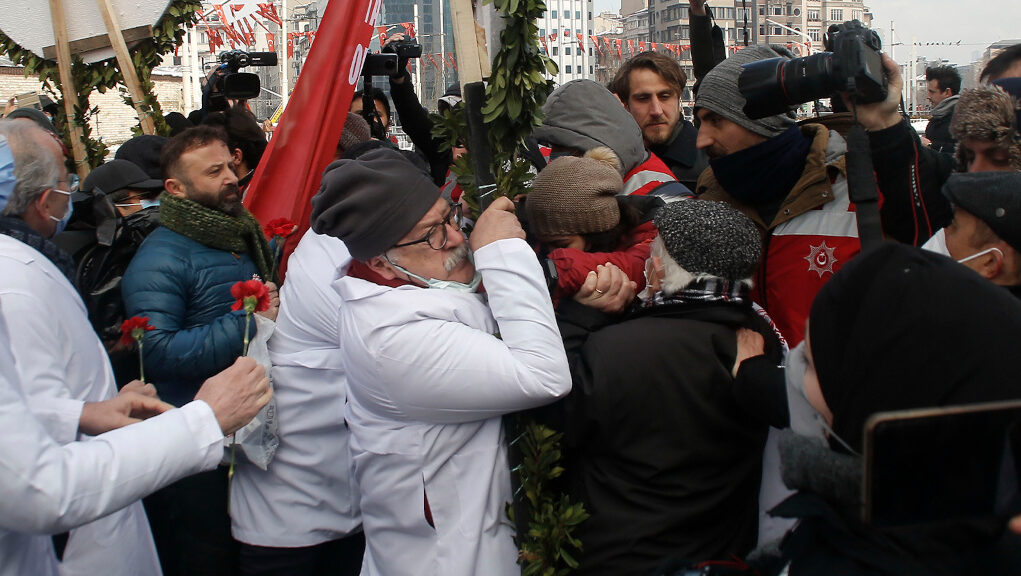 Turkish President Recep Tayyip Erdoğan has made a U-turn on remarks targeting the country’s doctors that led to outrage in the medical community last week, saying Turkey needs its doctors and that measures are on the way to improve the working conditions of healthcare professionals.

Erdoğan in a speech last week condemned an increasing number of Turkish doctors who choose to move to the private sector or go abroad for better job opportunities, saying they are free to go and that Turkey will find ways to make up for their loss.

After facing an angry reaction from the medical community, thousands of whose members took to the streets on the occasion of Medicine Day, marked every March 14 in Turkey, Erdoğan on Monday praised the efforts of doctors, especially during the pandemic, and said, “Turkey is always in need of its doctors and is indebted to them.”

Erdoğan’s remarks, which showed a clear softening in his stance towards doctors, came at an event marking Medicine Day in Ankara where he also announced some “good news” regarding the working conditions of health professionals.

Erdoğan said his government would take action to solve the problems of the medical community, including the introduction of harsher penalties for crimes against health professionals, the creation of a professional liability board, improvements in salary, better retirement benefits and an increase in payments to family physicians.

Health professionals announced earlier that they would go on strike across Turkey on Medicine Day and on March 15 in an effort to get their demands heard by the ruling party.

They are calling for more manageable workloads, increased security and a rise in pay due to the huge workload caused by the COVID-19 pandemic, rising cases of physical violence against healthcare employees and soaring inflation –- registered at a two-decade high, according to official figures -– that reduce doctors’ salaries to close to the minimum wage.

Only emergency care services were being provided at healthcare facilities across the country on Monday as part of the strike launched by 10 health organizations including the Turkish Medical Association (TTB).

Protesting healthcare workers faced police intervention in some venues on Monday, with representatives of the İstanbul Chamber of Physicians prevented from laying a wreath at the Atatürk Monument in Taksim Square on the occasion of Medicine Day.

“We are all physicians. We will lay a wreath and go. What is this scandal for? Shame on you, Erdoğan,” said one of the protestors.

Some opposition party politicians also voiced support for healthcare workers in the wake of Erdoğan’s remarks targeting them.

Main opposition Republican People’s Party (CHP) leader Kemal Kılıçdaroğlu tweeted: “Healthcare workers, to whom we trust our lives, we hold you in high esteem. Be patient, we’re almost there. We will send the man in the palace [Erdoğan] away! We will establish a healthcare system in which your working conditions are better and you will be properly rewarded for your efforts. Happy Medicine Day!”

“They will go nowhere. They will work in this country, with better conditions and happily. Happy Medicine Day to our health professionals who work selflessly for us under all conditions,” he tweeted, apparently criticizing Erdoğan for his remarks against healthcare workers.

While 1,405 doctors left their jobs in Turkey to work abroad in 2021, 197 more emigrated in January alone, according to TTB figures. Local media reports say thousands more are getting ready to leave as the Turkish government fails to meet their demands.