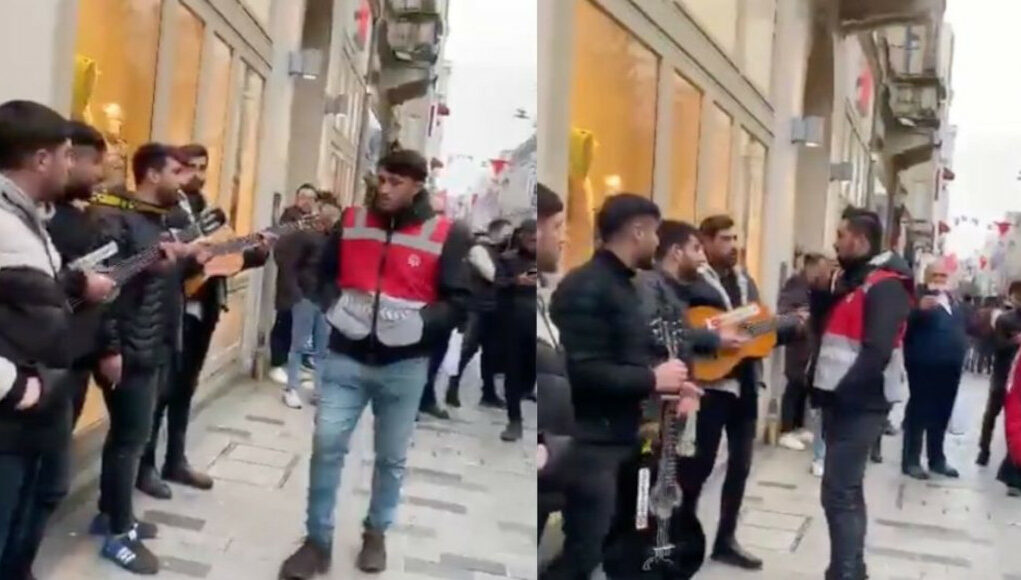 In a video posted on Twitter over the weekend, four young singers are seen singing a Kurdish song on İstiklal Street when they are approached by police officers who warn them to stop singing. When the music suddenly stops, a group of people is heard urging them to continue.

Mezopotamya reported that the singers were later taken into custody where they were subjected to mistreatment. Muhammed Taşdemir, one of the singers, told the agency that the police officers cursed at them as they seized their instruments and the money they earned by singing in the streets.

“We objected, but they fined us TL 205 ($15) for ‘disturbing the surroundings.’ We paid the money to get our instruments back. This is the fifth time they’ve seized them,” he said.

Yusuf Abak, another member of the group, said a police officer punched him and pushed him into the wall at the police station.

Singer Selim Öztürk said the police referred to them as “beggars” and throttled one of his friends who told them “not to shout.”

Noting that they have repeatedly filed applications with the district governor’s office for permission to perform on the streets, Halil Erim, the fourth member of the group, said they would keep on performing “despite prohibitions.”

The intervention of the police officers and the subsequent detention of the musicians attracted criticism on social media.

“The sensible public opinion that raised objections to a [verbal] attack on Sezen Aksu, championed arts and artists and caused the people making threats take a step back! Isn’t it ‘ripping out tongues’ to prevent Kurdish street singers from making music? Does it concern only Kurds?” Erdal Avcı of pro-Kurdish Peoples’ Democratic Party (HDP) tweeted on Sunday.

He was referring to President Recep Tayyip Erdoğan’s recent threats against pop music diva Aksu, claiming that she insulted religious values in one of her songs. The president, who without mentioning her name threatened to rip out the singer’s tongue, had to step back amid mounting criticism last week, saying Aksu was not the target of his remarks.

Turan asked Soylu if there is any law under which the young people were prevented from singing in Kurdish and if an investigation will be launched into the police officers in question.

Gergerlioğlu urged the interior minister to disclose the legal justification for the prohibition of people singing in Kurdish and also asked if there is a hatred of Kurds and Kurdish among police officers.

Kurds in Turkey are often pressured not to speak their native language. Authorities frequently claim that people speaking in Kurdish are actually chanting slogans in support of the outlawed Kurdistan Workers’ Party (PKK), which been leading an armed insurgency against Turkey’s security forces since the ’80s in a campaign that has claimed the lives of some 40,000 people.

Turkish authorities have increasingly restricted the use of Kurdish in recent years. Hate crimes against Kurds for speaking their language have also increased.