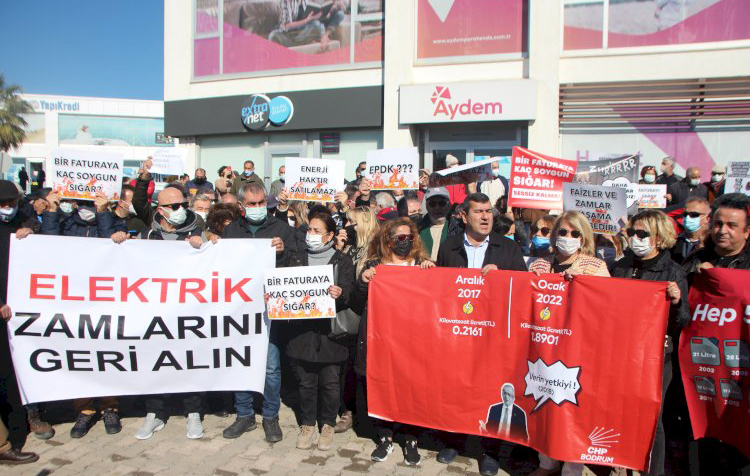 More and more people in Turkey are expressing their anger and protesting in the streets and on social media over the rising electricity and gas prices they have faced since the beginning of the year, Turkish media outlets reported.

Hundreds of people took to the streets in the popular tourism resort of Bodrum in western Turkey and the Black Sea province of Rize on Monday to stage demonstrations against increasing electricity prices. The protestors said there has been a two- to threefold increase in the electricity bills they received over the past month. They called on the government to revoke the recent price hikes and to resign.

Turks started the new year with news of jacked-up prices, fueled by a currency crisis amid the highest rate of inflation in nearly two decades.

Turkey’s Energy Market Regulatory Authority (EPDK) announced on Jan. 1 that it had raised electricity prices by around 50 percent for lower-demand households for 2022, and more than 100 percent for high-demand commercial users.

The latest price hikes put more financial burden on Turks, who were already challenged by the 44 percent depreciation of the Turkish lira against the US dollar last year, which significantly reduced their purchasing power, as well as an annual inflation, which reached its highest level in 19 years at 36.1 percent last month.

Similar protests took place in other parts of the country over the weekend.

On social media, too, more and more people are expressing anger at the high energy bills and comparing the recent energy costs with those of past years.

Famous singer Yeşim Salkım posted a video on Twitter that shows her wrapped in a blanket in a dim room.

“I’m wrapped in a blanket with only this one light on. Am I living in a country other than Turkey and just don’t know it? What are these price hikes? Are we in a dream or something? Somebody poke me and wake me up,” she says in the video.

Even some pro-government circles are voicing their frustration about the high energy bills. Yusuf Kaplan, who writes for the pro-government Yeni Şafak daily, recently tweeted that there was almost a 100 percent increase in electricity bills following the latest price hikes. He called on President Recep Tayyip Erdoğan to cancel the price hikes, which he said will make financially challenged people suffer.