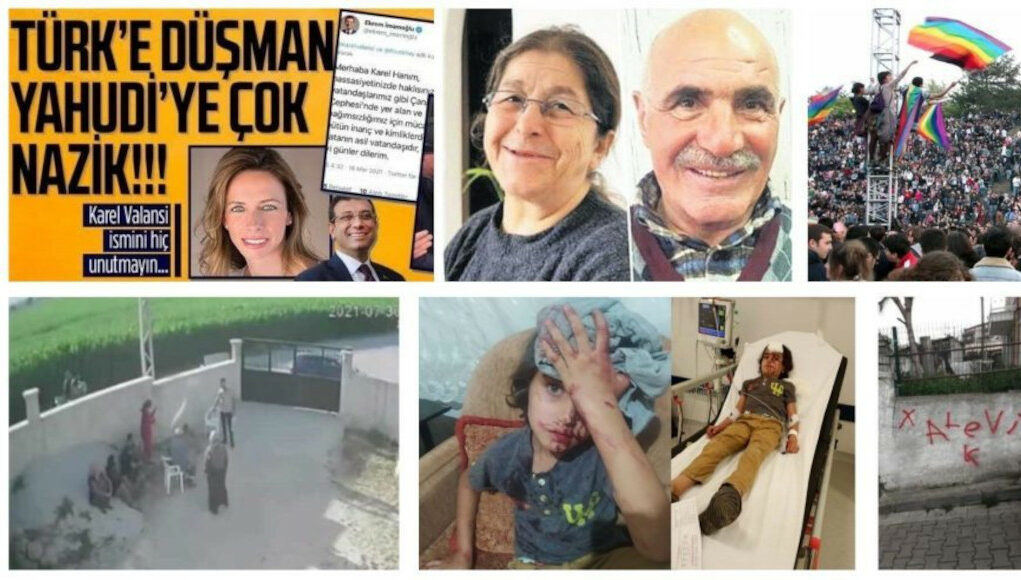 Minorities and refugees in Turkey continued to suffer from rights violations, hate speech and attacks throughout the year. President, Recep Tayyip Erdoğan, and his key ally, leader of the Nationalist Movement Party (MHP) Devlet Bahçeli, continued to use a divisive ultranationalist rhetoric throughout the year especially against the Kurds, contributing to the rise of hate crimes, the Stockholm Center for Freedom reported.

The government has made little effort to address the religious freedom issues including granting minority religious communities’ legal personality and permission to hold board member elections; recognizing Alevi houses of worship (cemevleri); and reopening the Theological School of Halki, a Patriarchate of the Eastern Orthodox Church seminary.

Turkey is home to a total of 4,038,857 refugees from around the world, according to the latest figures provided by Interior Minister Süleyman Soylu. Attitudes about refugees fleeing the long conflict in Syria have gradually hardened in the country, where they used to be welcomed with open arms, sympathy and compassion, as the number of newcomers has swelled over the past decade.

Anti-immigrant sentiment reached a boiling point, fueled by Turkey’s economic woes. With unemployment high and the price of food and housing skyrocketing, many Turks turned their frustration toward the refugees in the country, particularly the 3.7 million who fled the civil war in Syria.

The prospect of a new influx of refugees following the Taliban takeover of Afghanistan served to reinforce the unreceptive public mood. Videos purporting to show young Afghan men being smuggled into Turkey from Iran caused public outrage and led to calls for the government to safeguard the country’s borders.

Here is some of the most important news from 2021 in the field of minority and refugee rights:

Seven members of a Kurdish family were killed in July in central Turkey by armed assailants who tried to burn their house down in what rights activists said was a racist attack. More..

In August armed groups set up checkpoints in different parts of Antalya province amid rumors that wildfires ravaging the region were started by the outlawed Kurdistan Workers’ Party (PKK). A group of people reportedly stopped a car and beat a man apparently because he was Kurdish. More..

A Kurdish family from northern Iraq’s Erbil province was attacked in an apparent hate crime while they were visiting Turkey’s southern Mersin province in May. More..

In July a group of seasonal workers were attacked in Afyon province and a Kurdish family was attacked in Konya. More..

Restrictions on use of the Kurdish language

Kurdish was not included among the six languages that are supported by KADES, a smartphone app designed by the Turkish National Police for use by women to ask for help in cases of domestic violence. More..

Disapproval of the use of Kurdish was high on the agenda in August, with a popular TV host criticizing her guest for speaking Kurdish on live television and a prison administration investigating several prisoners for singing in Kurdish. More..

Kurdish singer Mem Ararat said in a statement in December that a concert of his that was scheduled to take place at Ankara’s Neşet Ertaş Culture Center was cancelled by the authorities because it included Kurdish songs. More..

The pressure on Kurds in Turkey to not speak their own language is a reflection of a general intolerance towards the Kurdish population, said Birca Belek Language and Culture Association Co-chair Mirza Roni. More..

A total of 16 pedestrians, including nine children and a disabled person, have died after being hit by government vehicles since 2018. The killing of civilians by armored vehicles is common in Turkey’s Southeast, where there is a heavy military presence due to ongoing clashes between the Turkish military and the outlawed PKK. More..

In November a police officer was given a reduced sentence of four years, five months and 10 days for the death of Şahin Öner, 18, after he hit him with an armored vehicle, due to “good conduct” displayed during the hearings, despite the fact that the defendant never appeared in court. More..

Garibe Gezer, an inmate who alleged that she was beaten and sexually harassed by prison guards in Kocaeli’s Kandıra Prison, was found dead in her cell in December. More..

Bülent Karaoğlu, a former gendarmerie officer, was responsible for the burning down of the southeastern Turkish village of Altınova (Vartinis) in 1993, which caused the death of nine people, including seven children, the first chamber of Turkey’s Supreme Court of Appeals said in May. More..

A Turkish crime boss who had been making scandalous allegations about the relationship between state actors and the mafia claimed in June that former Turkish interior minister and police chief Mehmet Ağar was planning an attack on a cemevi, an Alevi house of worship. More..

The United States Commission on International Religious Freedom (USCIRF) pointed out that discrimination against the Alevi community in Turkey was rampant and pervasive and that the situation under the leadership of President Recep Tayyip Erdoğan was only getting worse, in a message issued in July on the occasion of the 28th anniversary of the Sivas Massacre. More..

A number of Alevi residences were marked with red paint in Turkey’s northwestern Yalova province, bringing back memories of violence against the community in the past after their houses were similarly marked. More..

In possible sign of official discrimination, villages were identified as Alevi on Turkish Health Ministry map

The Turkish Ministry of Health was allegedly using a map of northern Tokat province on which Alevi villages appeared to be clearly marked, a patient’s relative revealed, leading to the fear of official discrimination against Alevi patients. More..

An Armenian church dating to 1603 in the western province of Kütahya that was on the Turkish Ministry of Culture and Tourism’s preservation list was demolished in January after it was acquired by a private party. More..

In March an old Armenian cemetery was destroyed during construction in Ankara’s Ulus district as part of gentrification project, and human remains were found at the site. More..

An old Armenian cemetery in Turkey’s eastern province of Van was destroyed by bulldozers in August and bones were scattered across the field, sparking outrage among the Armenian community and opposition politicians. More..

An Armenian Protestant church in Diyarbakır province was leased to the Ministry of Culture and Tourism for a period of 10 years to serve as a public library. More..

The Surp Yerrortutyun (Holy Trinity) Armenian church in central Turkey’s Akşehir district will serve as the “World’s Masters of Humor Art House” as part of a project to found a “humor village” in the hometown of famous 13th century Turkish satirist Nasreddin Hoca. More..

A far-right independent member of the Turkish Parliament threatened Turkish-Armenian lawmaker Garo Paylan with facing the same fate as his ancestors amid debates over the recognition of the mass killings of Armenians at the hands of the Ottoman Empire as genocide by the US administration. More..

The United States Commission on International Religious Freedom (USCIRF) recommended that the State Department place Turkey on its special watch list based on the Turkish government’s perpetration or toleration of severe violations of religious freedom, in its annual report released in April. More..

The pro-government Takvim daily in March launched an antisemitic attack against Karel Valansi, a Turkish journalist and foreign policy analyst, in a report critical of İstanbul Mayor Ekrem İmamoğlu. The report, headlined “[İmamoğlu] shows animosity to a Turk but great politeness to a Jew,” said İmamoğlu “showed too much respect to a Jewish journalist working in Turkey.” More..

The Jewish heritage of Turkey’s capital city of Ankara, which dates back to the 2nd century BC, was faced with destruction as the abandoned homes of the city’s Jews, who at one point numbered around 5,000, were identified as a site for urban renewal. More..

Chaldean and Assyrian associations in Europe, the United States, Australia and Iraq sent a joint letter to Turkey’s justice and interior ministers in February demanding a thorough investigation into the disappearance of Chaldean villager Hurmüz Diril and the murder of his wife Şimoni Diril. More..

A Turkish court in April handed down a 25-month prison sentence to an Assyrian priest in southeastern Turkey on charges of aiding the outlawed Kurdistan Workers’ Party (PKK). More..

The faculty of languages, history and geography of Turkey’s Ankara University in February announced that it had canceled plans to mark World Greek Language Day on February 9 after being targeted by pro-government newspapers and receiving condemnation and pushback on social media. More..

Three Syrian men were killed in an alleged hate crime in Turkey’s İzmir province in November.  A Turk poured gasoline over the Syrians while they were asleep and set them on fire. The man later admitted to having committed the hate crime. More..

A Syrian refugee family living in Turkey’s Gaziantep province was attacked in their home on March 28 in an apparent hate crime. More..

A Somali restaurant in Ankara’s central Kızılay district was attacked in April following anti-migrant reporting by the Sözcü daily. More..

A large number of Syrian residents of İzmir’s Cumhuriyet neighborhood left their homes after tensions increased following the alleged murder of 17-year-old Batuhan Barlak by a 20-year-old Syrian refugee in September. More..

Refugees in Turkey’s northwestern city of Bolu said they have been confronted with more hate crimes since the city council approved a discriminatory proposal imposing exorbitant fees on foreigners to access public services in the city. More..

A group of streetcleaners assaulted a Syrian man who was collecting trash in Antalya province, crushing his motorcycle and setting it on fire. More..

A refugee who had been living in İstanbul with her children for four months was beaten up and threatened by neighbors and insulted at the police station. More..

Eleven Syrian refugees who were detained in October after sharing videos on social media showing them eating bananas in an effort to condemn racism and discrimination in Turkey faced deportation. More..

In a landmark decision in December, a Turkish court handed down a prison sentence of 25 years to a police officer who shot a young Syrian refugee to death in 2020. More..

The Edirne Chief Public Prosecutor’s Office in December declined to pursue a case against gendarmes who allegedly threw refugees into a river after they were pushed back by Greece, without taking the testimony of all the witnesses and the accused. More..

Turkish authorities are summarily pushing Afghan asylum seekers crossing into the country from Iran back to Iran, denying them the right to seek asylum, in violation of international law, Human Rights Watch (HRW) said in an October statement. More..

A new Turkish far-right group in December shared a video on social media showing one of their members beating an Afghan refugee in an apparent hate crime. More..

Two refugees, one Syrian and the other Palestinian, were severely beaten by security officers at a repatriation center in Turkey’s western İzmir province on May 11. More..

Hate speech against refugees on Turkish social media increased in July, with a new wave of refugee arrivals in Turkey starting as the Taliban increased the territory it controlled in Afghanistan amid a US troop withdrawal. More..

Turkey was ranked 48th among 49 countries as regards the human rights of LGBT people, according to the 2021 Rainbow Europe Map published by the International Lesbian, Gay, Bisexual, Trans and Intersex Association (ILGA)-Europe. More..

Turkey’s President Erdoğan in February unleashed a torrent of attacks against what he called “the LGBT youth,” which came as sudden student protests began to rattle his 18-year rule. Interior Minister Süleyman Soylu reported the arrest of “four LGBT freaks” over the display, condemning the “degenerates” in Twitter posts that got flagged for “hateful conduct”. More..

The LGBT+ community in Turkey witnessed multiple acts of violence against its members in March with at least three transexual women suffering injuries or death. More..