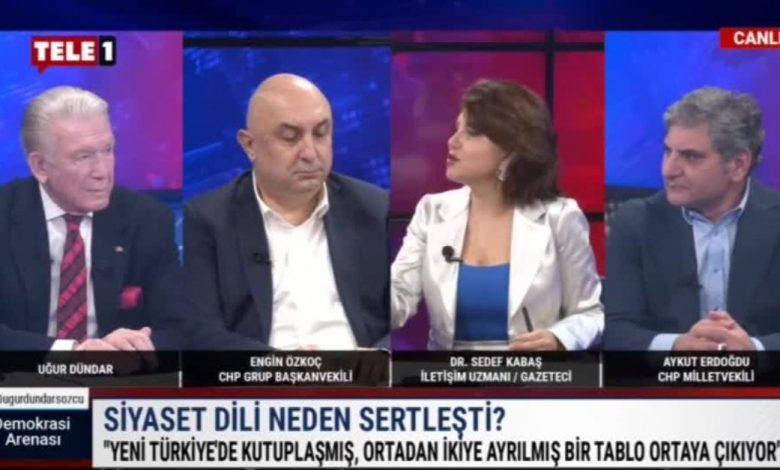 Turkey’s broadcasting watchdog, the Radio and Television Supreme Council (RTÜK), has imposed a fine on the pro-opposition Tele1 TV station and temporarily halted the broadcast of one of its programs due to the remarks of a journalist that led to her arrest on charges of insulting the president, a council member has announced.

The council held an extraordinary meeting on Monday after famous TV journalist Sedef Kabaş was arrested on Saturday due to recent remarks on the “Democracy Arena” program on TELE1 in which she allegedly insulted President Recep Tayyip Erdoğan.

In addition to imposing a fine on the station, RTÜK also ruled to halt the broadcast of “Democracy Arena,” hosted by veteran journalist Uğur Dündar, for five weeks for “provoking the public to enmity and hatred” due to Kabaş’s remarks.

Commenting on Erdoğan’s years-long performance as president during the program, Kabaş said, quoting a Circassian proverb, “When an [ox] enters a palace, it doesn’t become a king. [However], that palace becomes a barn.”

An investigation was launched into Kabaş on allegations of insulting the president on Friday, and police raided her house in Sarıyer in the early hours of Saturday and detained her.

She was arrested after appearing in court the same day.

The crime of insulting the president carries a jail sentence of one to four years in Turkey.

RTÜK’s decisions were announced by İlhan Taşçı, a council member from the main opposition Republican People’s Party (CHP), on Twitter on Monday.

“Here’s freedom of thought and freedom of expression,” Taşçı tweeted in criticism of RTÜK’s decision.

In addition to TELE1, RTÜK also imposed a fine on the opposition Fox TV station due to the remarks of news anchor Selçuk Tepeli, who criticized the economic policies of Erdoğan and his ruling Justice and Development Party (AKP).

RTÜK President Ebubekir Şahin had already announced on Friday that an investigation was launched into Tepeli on the grounds that he violated the “principle of impartiality” with his remarks.

Şahin tweeted that impartiality is a requirement of press ethics in news broadcasts and that it was unacceptable for the Fox TV news anchor to act almost like the leader of an opposition party and mislead the public.

RTÜK is accused of contributing to increasing censorship in the country by imposing punitive and disproportionate sanctions on independent television and radio stations critical of the Turkish government.