Kemal Kılıçdaroğlu, leader of Turkey’s main opposition Republican People’s Party (CHP), was denied entry to the headquarters of the Education Ministry in Ankara, where he went with the aim of speaking to officials regarding allegations of favoritism in the appointment of public school teachers, local media reported on Thursday.

Since 2016 contract teachers in Turkey have been expected to score over 50 points in the written State Personnel Examination (KPSS) and then over 60 points in an oral exam to be appointed as a teacher in public schools.

The results of the oral exams conducted Nov. 12-27 for the appointment of 15,000 contract teachers were announced on Dec. 27.

Thousands of candidates said afterward that they were eliminated in oral exams despite passing the KPSS with high scores, accusing Turkey’s ruling Justice and Development Party (AKP) of favoritism and seeking to place their own people in the positions.

The CHP leader announced his attempted visit in a tweet addressed to the ministry a day earlier, saying, “The rights of the children of this nation were violated in the oral exams. My request for an appointment with the Education Ministry hasn’t been responded to yet. [However], I will see you at 13.00.”

Only minutes before Kılıçdaroğlu’s scheduled arrival at the ministry’s headquarters in Ankara, Education Minister Mahmut Özer released a written statement on the ministry’s website. Özer said the doors of the ministry are open to everyone but that they shouldn’t be expected to agree to the CHP leader’s request for a meeting, “which was made as a fait accompli and went beyond its aim by misleading the public.”

The CHP leader, denied entry to the ministry, whose gates were locked according to local media reports, made a public statement in front of the headquarters, vowing to provide legal support to those candidates who think they have been treated unfairly. 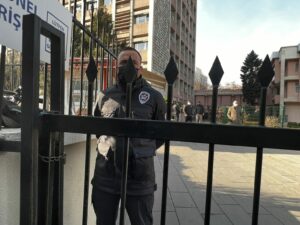 “If there is an injustice or unlawfulness here, if people’s rights are usurped, and it’s done by the order of the palace [President Recep Tayyip Erdoğan], it’s my … duty to oppose it. Wherever there is favoritism at play, I have an obligation to oppose it,” Kılıçdaroğlu told reporters.

The CHP leader said when similar developments took place in the past, those candidates who thought they were treated unfairly filed lawsuits at the Council of State, which upheld their claims of unjust treatment.

He added that the Council of State previously decided in such cases that the points the candidates were given in the oral exams were “suspicious.”

“We will provide all kinds of legal support to our friends who think they have been treated unfairly. … They [the AKP government] will see how we settle accounts with them,” Kılıçdaroğlu said.

Among the candidates who took to Twitter after the announcement of oral exam results and questioned the reasons why they were given points below 60 and denied appointments despite getting high written exam scores was Sultan Fidan, who scored 87.8 in the KPSS and came first in the field of biology.

“I had worked for the KPSS for two years, burning the midnight oil. I am currently doing my Ph.D. in the field. By what criteria did you eliminate [me]?” Fidan on Dec. 28 said in a tweet addressed to President Erdoğan and the Education Ministry.

“I went to the [Education Ministry], and the minister hid behind iron gates. A result we were expecting of course. … Favoritism has spread everywhere [in the government]. … Whichever [government] institution has been rotten [to the core], we will continue to meet [with them],” Kılıçdaroğlu said in a series of tweets later on Thursday.

Earlier in December Kılıçdaroğlu was also denied entry to the headquarters of the Turkish Statistical Institute (TurkStat) on the day the institute announced the country’s inflation rate, amid claims of manipulating inflation data for political reasons.

The rate of inflation climbed to 21.31 percent in December, up from 19.89 percent in October and the highest figure the country had seen in three years, eating into the incomes of Turks.