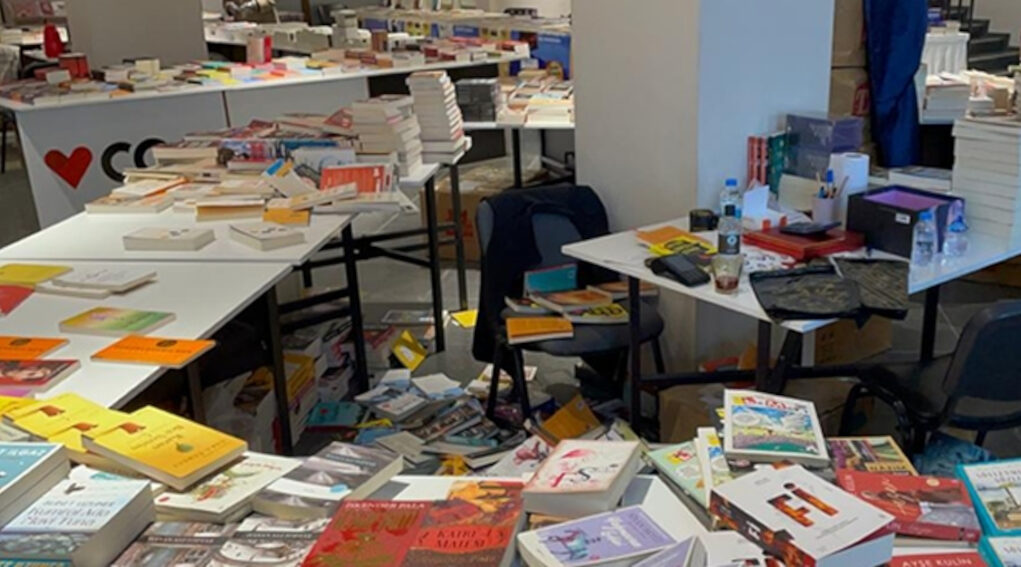 Numerous members of an ultranationalist group in Turkey, known as ülkücüler, affiliated with the far-right Nationalist Movement Party (MHP), attacked several stands run by publisher Haldun Açıksözlü at a book fair organized by the Safranbolu Municipality in Karabük province, extensively damaging the stands and the books.

When the group tried to seize Demirtaş’s books from the stalls, the police intervened to prevent a confrontation between the attackers and the owner of the book stands.

The attackers were apparently provoked into action after the local media published news stories reporting that “Selahattin Demirtaş’s books are for sale at the book fair.”

The police detained not only three attackers including Hakan Ünal, head of the Safranbolu branch of Ülkü Ocakları, but also three book stand owners who were involved in the incident.

“The vandals turned my stands into this because I sell Selahattin Demirtaş’s books,” Açıksözlü tweeted.

In a later post, Açıksözlü wrote, “The attackers were the vandals of the Karabük Ülkü Ocakları…” attaching a video showing the attack.

Local news website Karabük Net Haber, which made the book stands the target of the attackers, later reported the incident, saying, “Hakan Ünal, the head of Safranbolu branch of Ülkü Ocakları, and numerous ülkücü youth raided the book fair after it was reported that the books of Selahattin Demirtaş from the HDP were exhibited and sold at the fair.”

Demirtaş was co-chairperson of the HDP when he was arrested in November 2016. He has been behind bars since then despite a European Court of Human Rights (ECtHR) ruling in November 2018 that Demirtaş’s pre-trial detention was political and ordering his release. He has authored several books in jail.