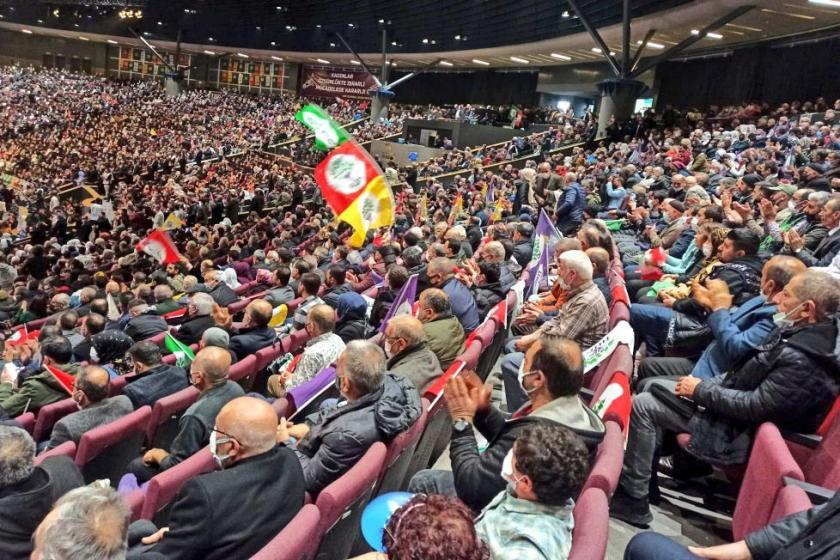 Turkish prosecutors have launched an investigation into the pro-Kurdish Peoples’ Democratic Party (HDP) due to the alleged dissemination of outlawed Kurdistan Workers’ Party (PKK) propaganda at a party congress in İstanbul on Sunday, Turkish media outlets reported.

The party held its İstanbul provincial congress, which was attended by the party’s lawmakers and thousands of its supporters, in Küçükçekmece.

The İstanbul Chief Public Prosecutor’s Office has announced that the investigation into the party has been launched based on a criminal complaint filed by the counterterrorism department of the Security Directorate General due to the slogans chanted and anthems sung at the congress promoting the PKK and its jailed leader Abdullah Öcalan.

The PKK, which has been waging a bloody campaign in Turkey’s Southeast since 1984, is listed as a terrorist organization by Turkey, the EU and the US.

The HDP is under immense political pressure as Turkey’s Constitutional Court accepted an indictment in June seeking the party’s closure. The HDP is accused in the indictment of links to the PKK and of posing a threat to the “indivisible integrity of the state.”

President Recep Tayyip Erdoğan and his ruling Justice and Development Party (AKP) have long portrayed the HDP as the political front of the PKK. The party denies links to the PKK and says it is working to achieve a peaceful solution to Turkey’s Kurdish issue and is only coming under attack because of its strong opposition to Erdoğan’s 19-year rule.

The Kurdish issue, a term prevalent in Turkey’s public discourse, refers to the demand for equal rights by the country’s Kurdish population and their struggle for recognition.

Hundreds of HDP politicians including the party’s former co-chairs have been behind bars for several years on bogus terrorism charges.