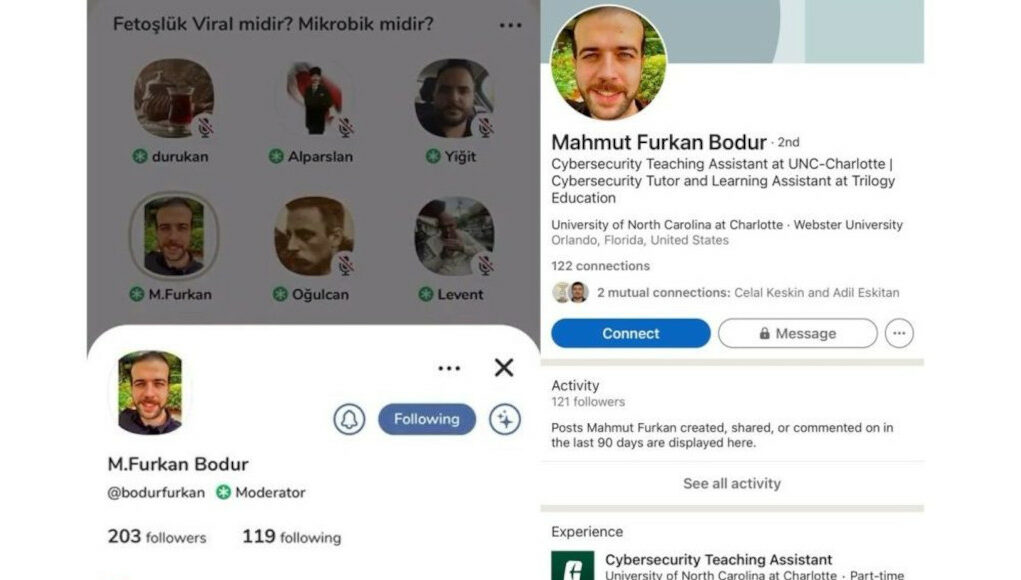 Audio records of a chatroom on social media app Clubhouse revealed a conversation among supporters of Turkish President Recep Tayyip Erdoğan on how to exterminate alleged followers of the Gülen movement who are currently in Turkish prisons, the Stockholm Center for Freedom reported on Tuesday.

The conversation was held in a room called “Is being a member of FETÖ [a derogative acronym used to refer to the Gülen movement as a terrorist organization] viral or microbial?” [Fetöşlük viral midir? Mikrobik midir?]. One user identified as M. Furkan Bodur (@bodurfurkan) is heard saying: “A day will come when things will change. [When that day comes] we will add drugs to their food just like in the case of Kaşif Kozinoğlu, then we will send them to do sports outdoors.” He then says the inmates would start collapsing one by one. “What happened? [people would ask]. We don’t know, really. They did a lot of sports and had heart attacks.”

Kozinoğlu was an agent for Turkey’s national intelligence agency MİT. He was found dead in prison in November 2011. According to autopsy reports, he died of chronic ischemic heart disease. Yet, there have been conspiracy theories surrounding his death. Bodur seems to imply that he was given a drug that made his heart fail.

Another speaker identified as “Alparslan” then responds, “What you just said is a pipe dream under current conditions because there are so many traitors among us.”

“We only need a brave, valiant Turkish youth in the cafeteria and nothing more,” Bodur replies.

According to a screenshot of a LinkedIn profile shared by exiled academic Emre Uslu, Bodur works as a cybersecurity teaching assistant at the University of North Carolina at Charlotte.

A similar conversation in Clubhouse took place in August. One user identified as Mustafa Aydın (@0854321) is heard asking, “Why is the government giving them food in prisons using my taxes?” in a video clip of the conversation that was shared on Twitter. “We shouldn’t give them any food. Let these dogs starve, then they’ll start chopping each other up, cooking and eating each other. Why should we care? We should exterminate them, destroy them completely.”

Hate speech against Gülen movement supporters has been widespread in Turkey since the corruption investigations of December 2013. Erdoğan himself used such words as “terrorists,” “traitors,” “vampires,” “leeches,” “tumor” and “virus” to refer to them. He in fact developed a unique vocabulary of 240 hateful slurs and insults that singled out the Gülen movement and eventually declared that the followers of the movement “have no right to life.”

Erdoğan’s followers have frequently used hate speech in different mediums including TV programs. Muttalip Kutluk Özgüven, a professor of communications, said followers of the Gülen movement who were not convicted by the courts should be sent to rehabilitation camps and subjected to psychological treatment.

“Their bodies do not belong to them. They have to serve Turkey’s interests. So I can’t accept these people being against the state. We have not used psychological methods on them,” he said in remarks that attracted widespread criticism on social media.