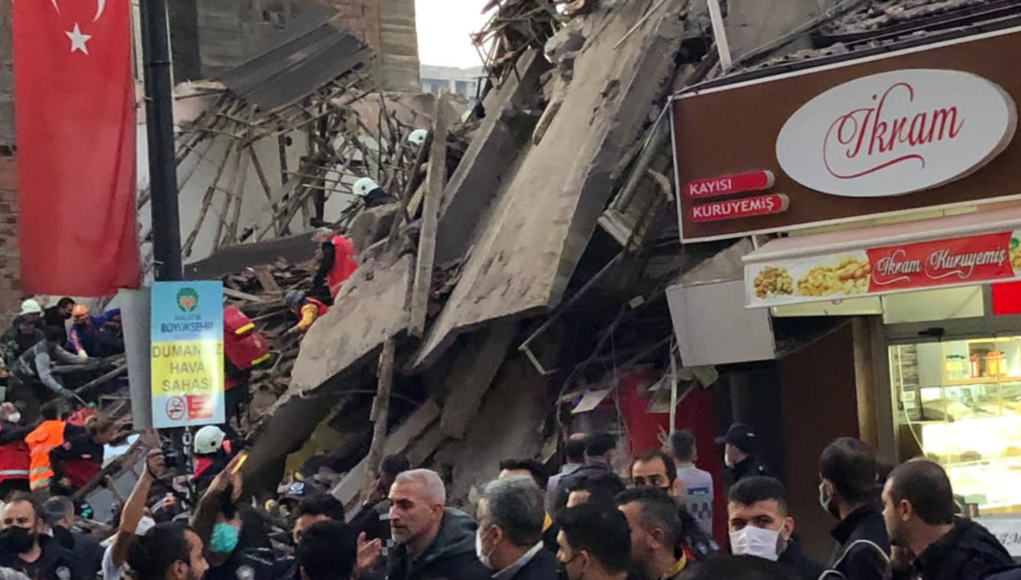 The incident occurred Tuesday afternoon on a busy street in the city of Malatya, as residents filled shops on their way home from work.

“Search and rescue operations in the collapsed Malatya building have come to an end. Thank God there are no victims,” Interior Minister Süleyman Soylu tweeted early Wednesday.

Earlier, interior ministry spokesman İsmail Çataklı said rescue workers had pulled 13 people from the rubble, while eight others managed to escape on their own.

Five of those rescued were still hospitalized, but their injuries were not life-threatening, regional governor Aydın Baruş said.

He had earlier said two were taken to intensive care.

CCTV footage of the collapse showed the building suddenly crumbling, shooting up a huge cloud of dust. A car parked in front of the building sped off while passers-by rushed to help those trapped under the rubble.

Witnesses and media reports said the building crumbled during planned renovation work that resulted in damage to one of the walls separating two of the ground floor restaurants.

“I heard a crack first and then the building collapsed. A cloud of dust emerged. It was like judgement day,” witness Turhan Çobanoğlu told HaberTürk television.

The Turkish government’s disaster and emergency management agency said 260 rescue workers were deployed to the scene, which was lit up to allow efforts to continue through the night.

Television images showed rescuers using construction diggers and their bare hands to clear out the heavy slabs of concrete and mounds of wood.

The cause of the collapse remained unclear, but Baruş pointed the finger at the work being done on the building.

The building’s owner and three people who were carrying out the work have been taken into custody, Malatya’s prosecutor’s office said.

Turkey has been rocked by a series of disasters — including a wave of wildfires and two flash floods — that claimed some 100 lives this year.

President Recep Tayyip Erdoğan came under fierce political pressure when it emerged in August that Turkey no longer had functioning fire-fighting planes.

The deadly flash floods wiped out houses in mountain valleys and sparked questions over why officials were approving construction licenses for regions prone to violent weather events.

Erdoğan’s office said the Turkish leader also placed calls to the local governor and mayor to receive a personal update about the rescue work.