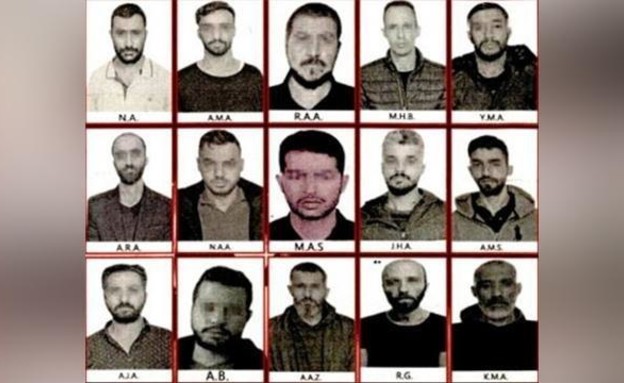 A pro-government newspaper in Turkey has released the photos of 15 suspects who allegedly worked for Israeli spy agency Mossad and were arrested by a Turkish court last week.

The mugshots of the 15 men, who are all Arabs, were released by the pro-government Sabah daily on Monday. The photos are believed to have been taken by the Turkish police.

One of the suspects, referred to as M.A.S., who reportedly studied at Konya University in central Turkey, told the daily that he had received thousands of euros for files on Palestinians and met with a Mossad case officer in Switzerland.

The man, who has a company that provided consulting services to students coming from abroad to İstanbul, told the paper that he had been tasked with monitoring Palestinians in Turkey. He said he had first been approached by a man claiming to represent an Arab in Germany who was interested in studying in Turkey.

“I met face-to-face with the Mossad official. He taught me to encrypt files on a laptop,” M.A.S. was quoted as saying by Sabah.

It was not clear how Sabah, which is close to President Recep Tayyip Erdoğan, was able to interview a suspect in pre-trial detention.

The man was initially sent hundreds of euros for providing information on how Palestinian students entered Turkish universities and what kind of support they received from Turkish authorities.

He also later claimed to have provided the client with details on a Palestinian organization working in Turkey.

He said he had received some $10,000 in exchange for providing information over three years; some of the money was sent via Western Union and some was given to him in an Istanbul market when he showed his ID and a receipt.

According to the paper Turkey’s National Intelligence Organization (MİT) also uncovered how the operatives were paid, which included cryptocurrency and wire transfers from jewelry and currency exchange stores.

The senior Mossad official described in the report was given the name A.Z., who is supposedly a German-based officer in charge of the supposed spying network.

One of the main spies, identified as A.B. in the report, allegedly collected information about what kind of facilities Turkey provides for anti-Israeli Palestinians in the country. A.B. entered Turkey in late 2015 and was reported as a missing person in June of this year, according to the report. The missing persons report was intended to divert attention from the cell, which was already under surveillance by then, Sabah claimed.

Turkish media outlets reported earlier this month that nine Palestinians had gone missing in Turkey in the space of one month. The Palestinian Embassy in Ankara announced that some of the missing Palestinians were living in İstanbul and that their families had been unable to contact them, while Palestinian authorities at the time then floated the possibility that Mossad might be behind the disappearances.

Details in the Sabah report have been widely covered by the Israeli media.

The suspects were detained on Oct. 7 by MİT following a year-long counterintelligence operation.

Ties between Israel and Turkey have been tense since a Turkish NGO oversaw a flotilla of ships that tried to break Israel’s blockade of the Gaza Strip in 2010.

There has been no ambassador in either country since May 2018, when the two had a bitter falling out, despite strong commercial ties, over Turkey’s reaction to Israeli attacks on Gaza and Washington’s decision to move its embassy from Tel Aviv to Jerusalem. The bilateral ties came under further strain when President Erdoğan denounced Israel’s West Bank annexation plan, vowing to prevent its implementation.