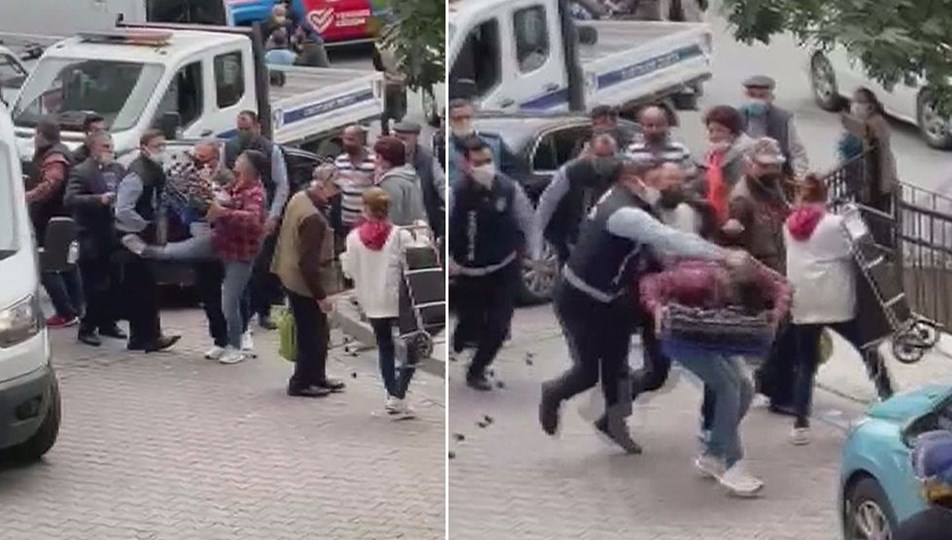 US warns Turkey against disrupting anti-jihadist mission in Syria

Cumhuriyet daily columnist Tuncay Mollaveisoğlu on Thursday revealed the incident on Twitter, posting a video showing a man being beaten by several municipal police officers believed to work for the Kağıthane Municipality, run by the Justice and Development Party (AKP), after he is seen in the clip kicking in the direction of one of the officers.

Mevlüt Öztekin, mayor of the municipality, on Friday released a statement on Twitter announcing that the municipal police officers who were involved in the “unfortunate incident that took place during an intervention with a vendor” were suspended from duty.

“A boy trying to make a living by selling fruit is being brutally beaten by municipal police officers. What kind of public service is this? What kind of duty is this? I hope they [the government officials] immediately do what’s necessary,” businessman İzzet Çapa tweeted.

“Municipal police officers attack a boy from behind who is trying to make a living by selling fruit and hit him in the head. Those who engage in such barbarian acts at a time when economic troubles and crisis are at the highest level cannot be members of this nation. Shame on you,” Mehmet Ali Özgür, a member of the opposition Felicity Party (SP), tweeted.

Journalist Ozan Gündoğdu also said in a tweet, “Low wages on the one hand, unemployment on the other… Informal jobs such as street peddling, picking up paper and daily or hourly labor are becoming predominant. This society is fighting a huge battle of nerves.”

The unemployment rate in Turkey, which averaged 10.58 percent from 2005 until 2021, and reached an all-time high of 14.40 percent in July 2020, stood at 12 percent in July, according to the latest data released by the Turkish Statistics Institute (TurkStat).

There is growing criticism of the government over people’s financial difficulties, which have worsened during the pandemic and with the continuing depreciation of the Turkish lira.

Official data released earlier this week showed Turkey’s annual inflation rising to 19.58 percent in September, its highest in two-and-a-half years. Inflation has been in double digits for most of the past five years.