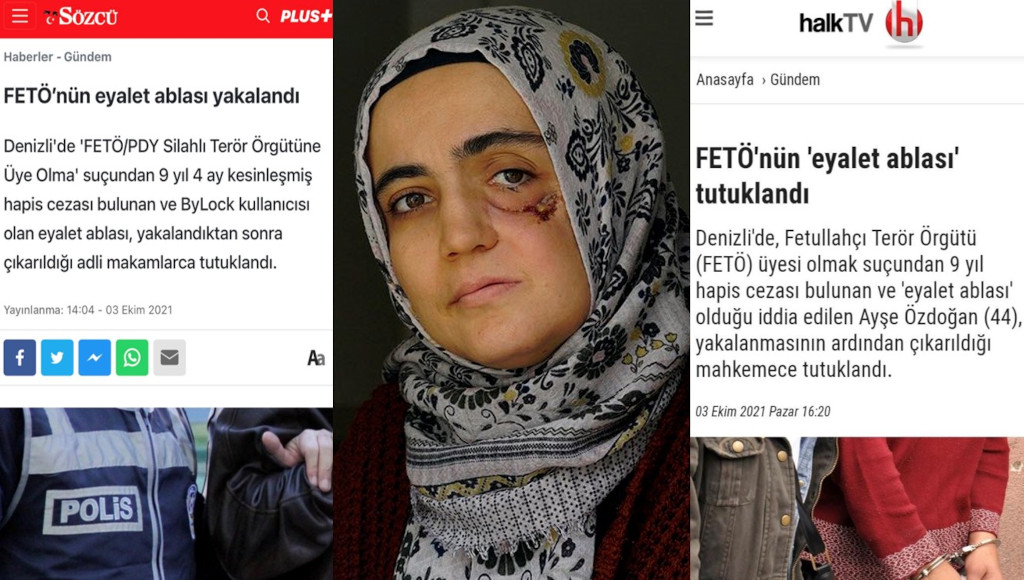 Pro-opposition media outlets Halk TV and the Sözcü daily faced harsh criticism for using government’s discourse about the arrest of Ayşe Özdoğan, 34, an end-stage cancer patient who was arrested on Saturday to serve a prison sentence on a terrorism conviction, the Stockholm Center for Freedom reported on Tuesday.

Sözcü used the pro-government İhlas News Agency’s (İHA) report on Özdoğan’s arrest, which falsely claimed that Özdoğan was found after “diligent police work.” Özdoğan has not been in hiding and has frequently posted on Twitter about her illness.

Halk TV, on the other hand, initially used the same story on its website with the headline “Big sister [in charge of women] of FETÖ [a derogatory term used by the Turkish government to refer to the Gülen movement] in charge of a province has been arrested.”

Halk TV later changed its headline to “Ayşe Özdoğan arrested” and used a more fact-based story, saying Özdoğan was detained at home and arrested by a court.

Özdoğan, a former teacher, was handed down a nine-year, four-month prison sentence for alleged links to the Gülen movement. An appeals court on June 11 upheld her sentence despite severe health problems and a hospital report saying she was not fit to stay in prison.

Her arrest caused an outcry on social media, with people from different backgrounds rallying around the hashtag #AyşeÖzdoğanTutuklanmasın (Don’t arrest Ayşe Özdoğan), which was among the top trending topics on Twitter in Turkey throughout the weekend.

Özdoğan and her husband were detained on April 8, 2019 for alleged links to the Gülen movement, but she was released due to her son’s heart condition. Her husband was sent to prison in southern Antalya province.

Özdoğan developed cancer seven months later and underwent an operation on November 12, 2019. However, she was arrested shortly thereafter, convicted and sentenced to nine years, six months in prison.

In a previous tweet Özdoğan said she could no longer eat solid foods and suffered from a chronic infection in her sinuses, where a tumor was removed. She added that she could not chew or swallow because of the cancer.